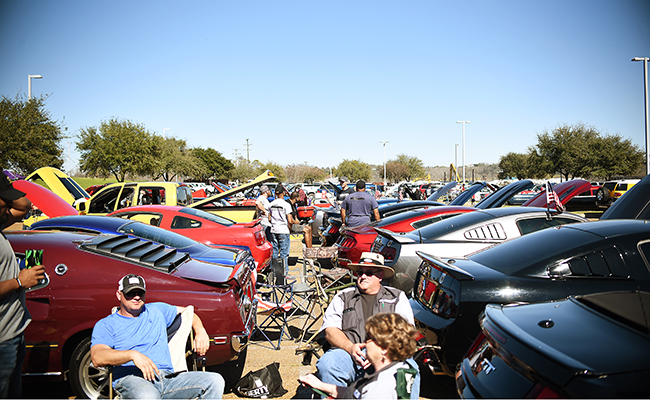 Members of the “Wicked Stang Mississippi” sit together surrounded by their Mustang's during the 2018 Cruising for a Cure Car Show on the Vidalia Riverfront. (File photo | The Natchez Democrat)

VIDALIA — Food, games and cars await those who cruise by the Vidalia Riverfront this weekend during the “8th Annual Cruising for a Cure Relay for Life Open Car Show” benefitting the American Cancer Society.

The event starts at 10 a.m. and lasts until 3 p.m. Saturday on the Vidalia Riverfront and features all kinds of cars and food vendors with funnel cakes, hotdogs, hamburgers and more, organizer Dusty Oaks said. There will also be T-shirts for sale, a silent auction, drawings for prizes and Bingo. The Big Idaho potato-shaped truck is also expected to make an appearance while making its national tour, as will Oaks’ own 2015 LSU Camaro adorned with yellow and purple stripes.

Participants will also meet up on the riverfront the night before at 5:30 for a drive around and car hop dinner at Sonic, he said.

Oaks is a three-time cancer survivor and captain of Team Bob in Relay for Life.

He said he was diagnosed in 2007 and again three years later. Then five years ago, he found he had skin cancer on his left ear, he said.

He survived all three cases and continues having doctor visits every four months to be sure there is no recurrence.  Feeling driven to help others fight the disease, he started the annual Cruising for a Cure car show.

Anyone can register to show their car in the event with 100% of proceeds going to the American Cancer Society, he said. Registration is $30 and can be done right up until the show starts and attending is free, he said.

This year promises to be the largest show yet, he said.

“This year we’re expecting 18 different vendors of all kinds and anywhere from 200 to 400 cars,” Oaks said. “Last year we had over 100 cars and raised around $8,000 for the American Cancer Society.”

Checks should be made payable to the American Cancer Society and can be mailed to 1211 Apple St., Vidalia, LA, 71373.