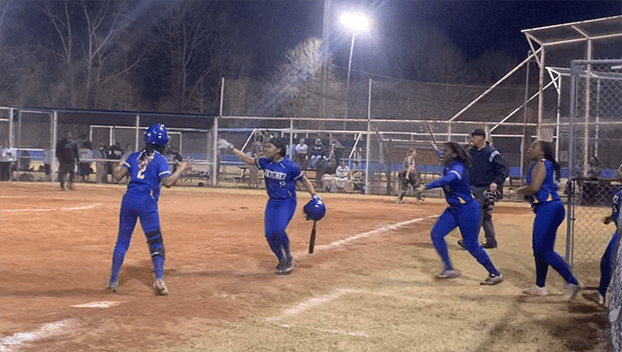 Left, Natchez junior Taylor Henry is mobbed by her teammates. She was the walkoff hero for the Bulldogs as they beat Franklin County on an RBI triple to right field. Natchez won 10-9 Thursday night. (Hunter Cloud | The Natchez Democrat)

NATCHEZ — Bulldog junior Taylor Henry stepped to the plate. There were two outs, a runner on first, and the score tied 9-9 with Franklin County in the bottom of the seventh. A crack of the bat sent a line drive into right-center field, and Henry took off for second as she rounded first.

Her teammate Ta’Niyah Johnson was headed for third when the Franklin County outfielder picked up the ball and threw it in. Head Coach Bonita Hamilton windmilled her arm to tell Johnson to go to the plate.

She beat the throw by a mile as her teammates poured out of the dugout to celebrate. Henry had driven in the winning run on a walk-off triple as Natchez won 10-9 Thursday afternoon.

“I was a little nervous. I felt there was a little pressure on me because I didn’t want the team to lose,” Henry said. “If I had gotten out, we would have played more. I hoped I touched it. I didn’t think it would go that far. When I got to first, I thought ‘keep running.'”

She rounded second and was ready to go home, but the winning run had scored. She said it was exciting to help her team get the win. Last season, she had a walk-off, she said.

The play was exciting to her. She enjoyed celebrating with her teammates as they danced around in the dugout, infield, and out of the post-game speech.

“I just like running, so this was really exciting for me. I used to run track, but it was interfering with softball,” Henry said. “The post-game dance is called the Griddy. I think that dance has been out since last year. Every time we win, it is what we do. It is exciting. It is a dance all the sports players do.”

Natchez had a 9-4 lead going into the top of the seventh inning and needed three outs to win against Franklin County. The visiting Bulldogs rallied and pushed five runs across the plate to tie the game 9-9.

All eyes on the final court, Bulldogs beat Bobcats…