‘SHE HOPPED OFF,’ Driver jumps from rolling bus due to mechanical issue 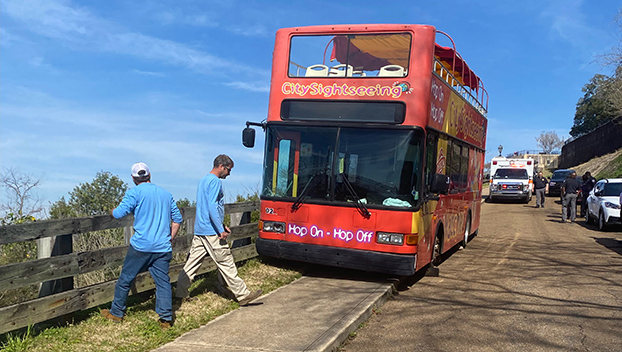 NATCHEZ — Traffic on Silver Street stalled for a couple of hours when the driver of the “Hop On-Hop Off” tour bus quickly bailed from the vehicle as it hit a guard rail.

To bystanders, it looked as though the bus was getting ready to roll off of a 30-foot cliff down to the Mississippi River on Friday afternoon.

Natchez Police Chief Joseph Daughtry said the woman veered the bus into the rail to stop it from rolling when she felt that it had a mechanical issue as she was driving down the hill.

She steered it onto the sidewalk and “hopped off” as it hit the rail, likely preventing a worse accident, he said.

“I thank God for her quick thinking to stop the bus,” he said.

Daughtry said the driver badly injured her foot and no one else was hurt. The driver’s injuries are not life-threatening, he said.