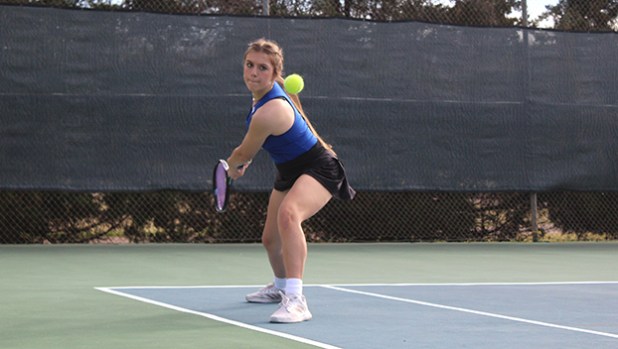 ACCS sophomore Ava McDonald hits a shot in the first set against Central Hinds Wednesday. She is the team’s only left handed player. Head Coach Nicole Gaston calls her a unicorn, which is fitting because that was her favorite animal as a kid. (Hunter Cloud | The Natchez Democrat) 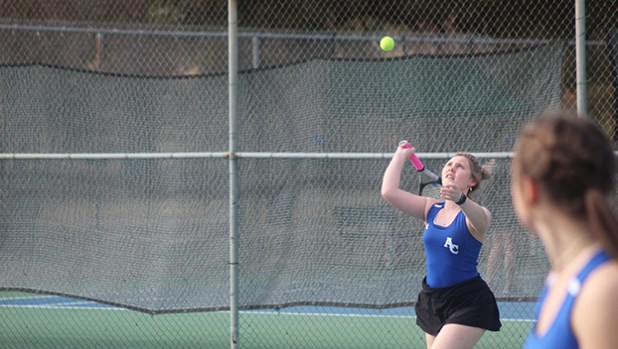 NATCHEZ — Doubles partners Camren Strittman and Ava McDonald fought back from a 3-6 loss in their first set as the No.1 doubles to win the second set 6-3 and the tiebreaker 10-7 against Central Hinds Wednesday. AC’s sophomores are in their third year of playing tennis and started off the season with the Rebel’s only win on a varsity court Wednesday.

They had a rocky start in the first set. After sticking with the Lady Cougars they lost three games in a row to drop the first set 3-6. Strittman said they were a little intimidated because they don’t typically play as the No.1 doubles pair.

Central Hinds is a district team and added more pressure to the moment, she said.

“It was so scary losing that first set,” Strittman said. “Our mindset was we had to win to keep going. We didn’t know how to do the tie breaker when we got to it. It is easy to get down when you lose points, but you have to keep your brain calm.”

Head Coach Nicole Gatson said they have a positive mindset and it helped them shake the first set off and focus on winning the second set and tie breaker.

McDonald said they had to tell themselves they knew how to play tennis, how to serve and return to calm down any nerves they felt. Eventually, they learned more about the opponent and their limitations. It helped them rally back and win those last two sets.

“I was so scared. We had only won against WCCA and Natchez last year,” McDonald said. “I get very nervous when I serve, but Strittman would tell me I got it. Calm down.”

The girls settled down and began angling their shots forcing the other doubles partners to run more and get them out of position. By the tie breaker, their plan was to get the ball over the net which helped them rally from a 7-4 deficit.

Strittman said when they are playing in a tennis match they tend to think of it as multiple games within the games. If they can win enough of those games they will win the match. Positive approach to play and taking tennis in steps helps them.

They met and started playing tennis in eighth grade. In 2020, COVID canceled their first season so last year was their first year playing together competitively. McDonald and Strittman have formed a good relationship in those three years.

“They have a great relationship; they don’t let the tension get between them,” Gatson said.

Last year, they played Central Hinds and Brookhaven Academy who had twins on their side. In their first competitive tennis match together, they played twins who started playing in sixth grade, Strittman said.

“It was terrifying,” she said.

She started playing tennis because her mom played tennis in high school for a year and always talked about how much fun she had. Coach Gaston invited her to play over the summer before eighth grade and she fell in love with the game and joined the tennis team.

Strittman started playing tennis because the softball player Shelby Mason at AC played tennis. She looked up to her and decided to give tennis a try. At first, every tennis shot she hit would fly out of the court because she hit it like a softball, she said. Her nickname on the team is now softball.

She and McDonald have formed a bond like twins in a way. Anytime they have time to practice tennis they will go out to the courts. Rain and ice storms are the only time they don’t get tennis practice, they said. It helps they are friends off the court.

“We met in eighth grade but it feels so much longer,” Strittman said. “In doubles, you have to talk to your partner. We work together well. It carries over into practice and the more time spent together the closer you get.”

To reach state, the girls will need to win district first. They have a lot of room to grow in how they hit the ball and the strategies they use, McDonald said. At the same time, they have grown together in knowing how to communicate.

Her favorite thing about playing with Strittman is the encouragement she gets from her friend. Tennis is a mind game and she helps McDonald stay in the game mentally.

After winning their first court of the season, the girls are keeping their mind focused on the next match ahead.

“We won’t let this win get to our heads. We don’t want to be cocky,” Strittman said. “We want to be really good. I want to go to state. It would be so cool.”