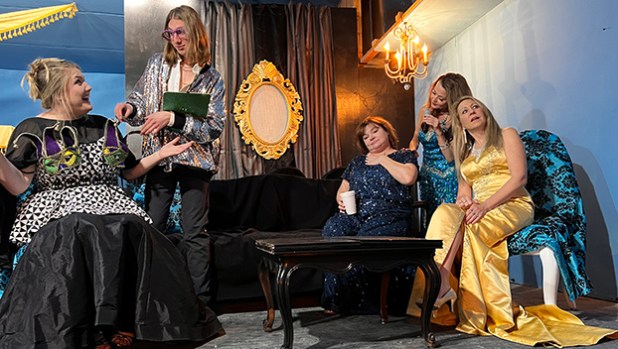 From left, Malori Giannaris, Dylan Brocato, Quincy Vidrine, Tracy McCartney and Alicia Dutton star in the upcoming debut of “Belles Take the Big Easy,” a screenplay written and directed by Dutton. The show will be the first for the new Natchez dinner theater, Storyville Cabaret on Commerce Street. (Sabrina Robertson | The Natchez Democrat) 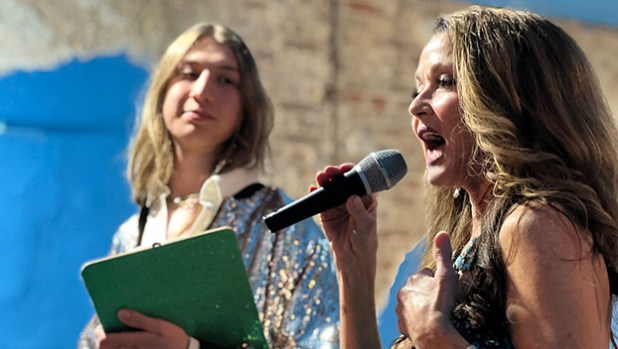 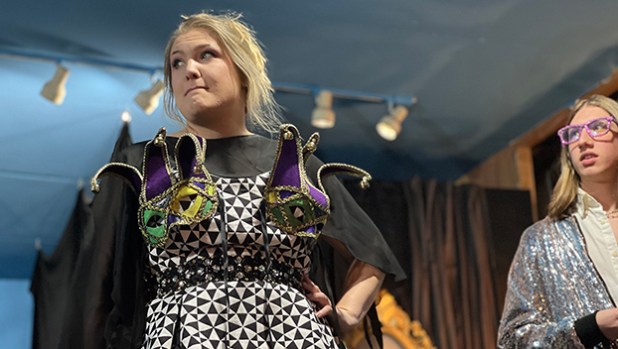 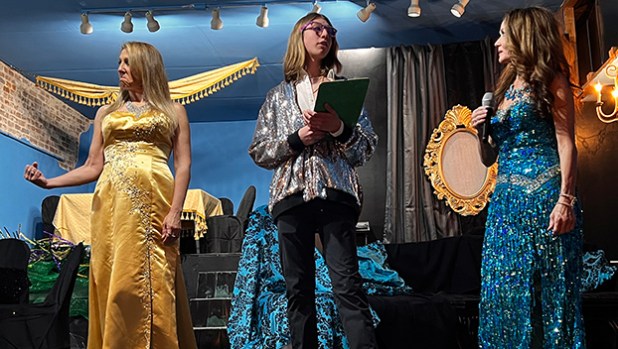 Editor’s note: An earlier version of this story erroneously stated the admission cost for Belles Take the Big Easy. The cost per person is $30. We regret the error and are happy to set the record straight.

NATCHEZ — At the Storyville Cabaret and Dinner Theater, you can have your meal delivered to the venue or pick it up and bring it with you. You bring the food and drink, and the Cabaret will bring the entertainment.

Dutton and her husband Eddie, a Marine, moved to Natchez from Atlanta, Georgia, in February 2020 and bought buildings that used to hold H. Hal Garner Antiques & Interiors on Franklin Street.

“We bought the buildings downtown in January 2020 and then hello COVID,” Dutton said, adding plans were put on a temporary hold as a result. Dutton said the building on Commerce Street turned out to be a better fit for a dinner theater, so they sold the other buildings and moved it there instead.

“We enjoyed visiting Natchez and thought it would be nice to own our own theater,” she said. “I never considered it before until I came to Natchez.”

The first production at Storyville Cabaret is Dutton’s original work, “Belles Take the Big Easy,” which would be the show’s first performance on any stage. However, Dutton has had many other plays performed on stages across the country, she said.

Her screenplays have seen success in many competitions around the United States and the globe, including a first-place win at The Polish International Film Festival.

Some of her award-winning screenplays and books include “Going Home to Dixie,” “Bound for the Outer Banks,” “Southern Sirens,” “Parading Crazy on the Porch,” “Christmas in Dixie,” “Christmas Queens,” Wedding Belles” and “Wedding Themed Comedic Monologues for Women.”

Dutton holds a Bachelor’s Degree in Marine Biology and is a certified paralegal and histotechnologist who has been employed across a spectrum of fields from a Centers for Disease Control laboratory specialist to pageant coach.

Dutton specializes in writing musicals with a focus on strong female lead characters in a Southern setting, she said.

The cabaret is like many found regionally all across Texas, Georgia and Alabama, she said.

“It’s BYOB and you bring your own meal. You can have it door dashed or delivered from the restaurant and set your own table,” she said. “It’s $30 per person and for a $10 upcharge, we do the place setting and centerpiece.”

Belles Take the Big Easy features five women who travel from Alabama to New Orleans to “strike Mardi Gras off their bucket list.”

At the famed Bacchus Mardi Gras Ball, a fortune-teller delivers some disturbing news that sets the ladies on a journey with Marie the Merry Maid, who Celeste believes is Voodoo Queen Marie Laveau reincarnated. Together, the six ladies tackle the Big Easy to gather items needed to ward off a perceived curse.

Jena Louisiana native Tracy McCartney plays Celeste, the curator of a new web series, “Say Yes to Anything but A Wedding Dress” filmed at a French Quarter boutique owned by a flamboyant designer named Blaise played by an ACCS student, Dylan Brocato.

Quincy Vidrine, who Dutton says is “no stranger to the stage,” plays the “out of control” Regina, who’s ready to cut loose at the slightest opportunity.

Teri Pospisil plays the uptight Catherine, whose ex-husband drops a bombshell granting her a new lease on life that has her and the other girls celebrating “with more than coffee and beignets at Café du Monde,” Dutton said.

Other stars in the show include Joe Wild as Thibeaux, Tammi Scales as Marie the Voodoo Priestess, Wanda DeBono as Cherry and Dutton as Bree.

Shows are at 7:30 p.m. March 17 through 19 and at 2:30 p.m. March 20. Doors open for table set up an hour before each performance. Tables can seat as many as eight people, making Storyville a great place for group or family night outs, Dutton said. The building will also serve as an event venue for weddings and other special occasions, she said.

Upcoming performances and events in April and May will help benefit “Ya’ll Means All Natchez” a non-profit that supports suicide prevention and raises awareness about depression among LGBTQ+ youth.

Tickets can be reserved and more information about the venue and upcoming events can be found at www.storyvillecabaret.com.