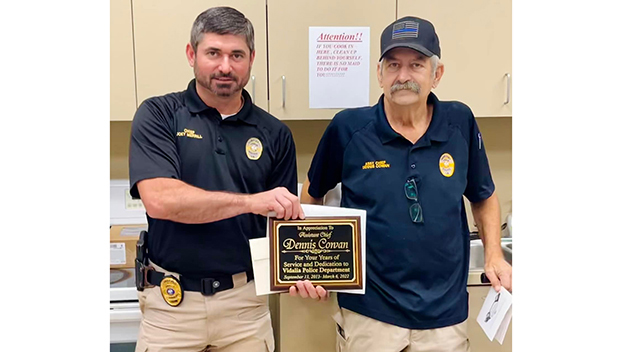 Cowan has served in various leadership roles from a chief investigator at Concordia Parish Sheriff’s Office to assistant chief of police. For the past nine years, Cowan has worked at the Vidalia Police Department.

Vidalia Police Chief Joey Merrill described the retirement of Cowan, “one of the most knowledgeable men in law enforcement in the State of Louisiana” as bittersweet.

He added he is sad to see him leave but is happy knowing he will be enjoying his retirement with his family.

Former Sheriff Randy Maxwell said Cowan was at CPSO when he became Sheriff in 1990 as one of the original 37 deputies working there during his administration.

“It didn’t take me long to recognize his special talents of being able to talk to all people. He could go up and down the line showing respect and compassion. He was named chief investigator and held that position his entire career with the Sheriff’s Office. He solved and oversaw thousands of cases. He was a blessing to me and the people of Concordia. Dennis was highly appreciated and respected in the law enforcement community. It’s quite an honor for me to have worked with him all those years and call him my friend. A remarkable career for a man that was born too late and was more comfortable on a horse than in a car. Enjoy your retirement, well deserved.”

Sheriff David Hedrick said he learned a lot from Cowan over more than 20 years of working for him.

“Dennis Cowan not only served Concordia Parish for almost four decades but served as my boss, mentor and friend for more than 20 years,” he said. “Dennis was the best boss I have had the pleasure working for. When I think of Dennis, I always think of him in his black cowboy hat riding his horse to Ferriday. I wish you many years of a healthy and happy retirement my friend.”