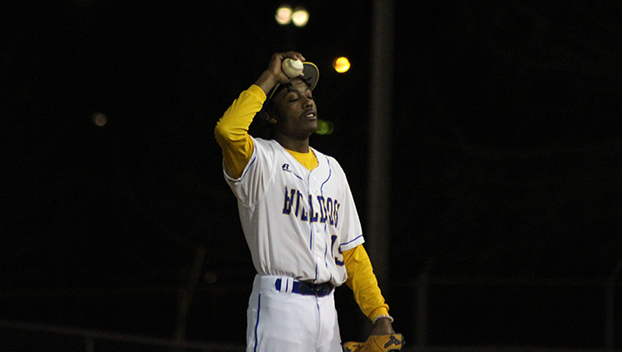 Jaleel Adams scratches his head in relief for the Bulldogs. Natchez gave up 12 runs in the third inning in a 19-7 loss to Vicksburg. The Gators scored six earned runs, the rest were unearned as Natchez committed nine errors. (Hunter Cloud | The Natchez Democrat)

NATCHEZ — Senior Rodrick Simpson gave the Bulldogs an early advantage in the first inning with a triple to center field. He finished the game with two hits and two RBIs for Natchez.

Unfortunately, Natchez struggled to get out of innings and find the strike zone in their 19-7 loss to Vicksburg Monday night. As a team, the Bulldogs committed nine errors in four innings.

Head Coach Dan Smith designated assistant coach Charles Cothern to talk about the performance. Cothern said the Bulldogs got off to a great start defensively retiring the gators without a run but struggled from the second inning forward.

“We had great momentum…Errors have been killing us all season. We are a young team. It is routine plays we have to make, and we aren’t making them,” Cothern said. “It is frustrating as a coach. It is something we work on every day. We have some young kids. We can’t go out there and make the play for them. They have to step up and make the play.”

Pitching-wise, Natchez had a rough day from the mound. In the third inning, Vicksburg scored 12 runs. Most of the Gators who crossed the plate scored from a wild pitch. Natchez pitchers Jaleel

Adams and Jwun Mackey threw 129 combined pitches 59 were strikes. Natchez struggled to find the strike zone 54 percent of the time.

Giving up 12 runs in an inning flipped the game from a one-run deficit to 13. It took away momentum from Natchez and buried the young team in another hole.

“Our kids got down on ourselves. When it is going like that, you have to keep fighting,” Cothern said. “When you are a young team, it happens. We are just young. We have to keep grinding and working. We have to cut down errors before district. We still have a chance to fix it.”