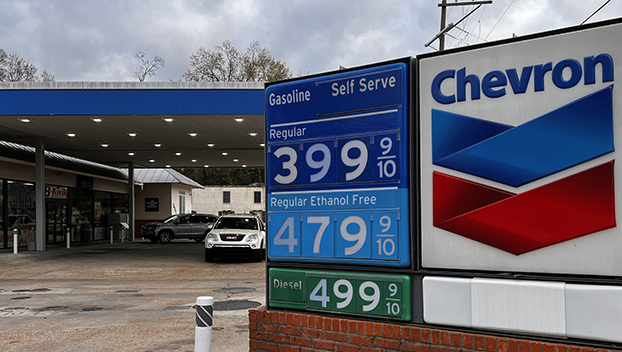 NATCHEZ — What people pay at Natchez gas pumps has been close to or higher than $4 per gallon in recent days with no signs of dropping any time soon. This week, gas prices at some stations in Natchez surpassed the national average of $4.06 per gallon, the highest national average since 2008, according to GasBuddy.

This occurred just before President Joe Biden announced Tuesday that the United States will ban all Russian oil imports, toughening the toll on Russia’s economy in retaliation for its invasion of Ukraine.

The President warned the cost of this will affect Americans at the gas pump.

Kevin Wilson, owner of Blackjack Oil Company in Natchez, said oil sells for approximately $127 a barrel today while a year ago it was between $20 and $25 a barrel.

Wilson said the inflation in the price of oil was already happening and the war between Russia and Ukraine sped up the process. The price difference, he said, is because oil production in the United States has decreased significantly in the past year. Wilson said Blackjack wells have not been operational for five to six years because of the cost of drilling and the price of oil.

Gas companies don’t necessarily benefit from the higher cost of gas, he said, as fuel suppliers have to purchase the fuel at a higher cost before they can sell it.

If gas prices appear cheaper in Vidalia than in Natchez, it may be because of the difference in state taxes, Wilson said.

“Gas in Louisiana has a different price because of state taxes and if there is a cheaper price in Vicksburg, Jackson, McComb and Brookhaven, it’s because they’re closer to an interstate,” Wilson said. “All the distributors get charged more to bring the fuel to Natchez.”

To drill again is a process that can take two years or more to lease the land, build the infrastructure and then drill, he said.

“We’re trying to kick off every well to get them back online,” he said.

He added when Blackjack’s wells do produce oil locally, it would not add enough to the supply to affect the price much.

“We’re what you call stripper wells (which only produce 15 to 20 barrels a day). We’re not going to make that much of a difference. There was a time we supplied about 25% of the oil in the country. … I think the price will drop back some, but not to a level where people will be happy with it. It would be more like $100 a barrel. … There’s no quick fix.”

Going back 10 years, the average price of gasoline in Mississippi reached a high of $3.58 per gallon while the national average was $3.76 per gallon.

Patrick De Haan, head of petroleum analysis at GasBuddy, said he does not expect the cost to lower any time soon.

“There are few words to describe the unprecedented rise in gasoline prices over the last week, with massive spikes coast to coast in both gasoline and diesel prices, as oil prices jump to their highest since 2008. Forget the $4 per gallon mark, the nation will soon set new record highs and we could push closer to a national average of $4.50 (per gallon). California could be heading for $5.50 per gallon with more stations charging $6 and beyond,” Haan said. “We’ve never been in this situation before with this level of uncertainty. As we lose a major global producer under the weight of deserving bipartisan sanctions for invading a sovereign country, the cost is high. Americans will be feeling the pain of the rise in prices for quite some time, with little good news foreseen.”

GasBuddy data is accessible at prices.GasBuddy.com.