‘We need to listen to them,’ AMB Association hosts community forum to address youth concerns 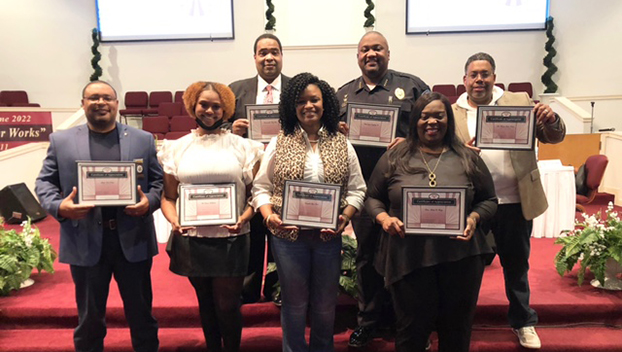 NATCHEZ — The consensus among leaders in a Monday night panel discussion at the Adams County Antioch Missionary Baptist Association is that parents and the community should listen to children to address the challenges facing youth.

This panel was open to the public. A panel of local leaders and one college student weighed in on issues such as mental health, suicide, spiritual engagement, social media influence, community redevelopment and more. Questions were submitted beforehand from youth within the community. The two-hour event began at 6:30 p.m.

At Monday’s forum, Panelist Damira McGruder, Natchez native and a junior at the University of Southern Mississippi, responded to the first question, “What is the mindset of young people?”  “The mindset for one comes from social media. I’ve seen what social media has done to me involuntarily which is why I take social media breaks,” she said. “We see things online and we think that if that person has it then why don’t we. We start comparing ourselves. Then, that brings on involuntary negative thoughts which in turn brings negative energy towards yourself. Negative things start coming to you. The mindset of youth today is…I’m just trying to make it.”

“We came from a generation where our parents told us to shut up and sit down and that’s what we did. This generation is a generation of expressive social media. If you shut them down and don’t let them express themselves, they’re going to feel like they have nowhere to turn but to the people who show them attention they’re seeking. Parents, you need to love on your kids, show them support and give them your time.”

Natchez Police Chief Joseph Daughtry responded to  the question, “Is there anything that the community can do to establish more dialogue with youth?”

“If a child says they want to hurt themselves, you need to listen to them,” he said. “We need to listen to get them the proper help that they need. We had children who attended two funerals in one day. That’s a lot for them to have to deal with, physically and mentally”.

Later during the panel discussions when asked what can be done to add recreation, programs, and activities to keep the youth busy, Daughtery added, “We have to put that pride aside and help our children. On Saturday, the new Jordans came out and we had 300 people in line to get a pair. Those parents are not here. It’s called prioritizing. We prioritize what we want. Is it more important to get in line to get Jordans than to talk about what’s going on and what can we do to save our children?”

When asked “What would be some suggestions in talking with children about mental health when people attach stigmas to some of these issues?” McGruder said, “Listen, for one. All a child wants to be is heard. They go through things by themselves, alone, and they just want to know someone is there and that someone heard them.”

Evangelist Agnes Cruel added, “I think you should be your child’s friend, that is, (while knowing) I’m the parent and you’re the child. We come here today as a community of people who are concerned, but where does it really start? It starts at home. Do you know what your child is doing when they walk in the door? A child can be in a room from 3:30 to 10:30, and you have not seen them or asked them a question. You haven’t asked them about how their day was. It starts at home.”

“It all boils down to building better relationships with our children. We should not have our children so afraid of us until they’re not willing to talk to us. Don’t have your child afraid to say, ‘Daddy, this person offered me alcohol today.’ They don’t’ have to tell you who it is but build that relationship with your child to let them know, ‘I’m here for you.’ Learn to listen. As Sister McGruder said, our children are faced with so much out there.”

Cusic added, “There are several warning signs that children show before things happen. When you see your child crying out for help, you know. Visit the Jason Foundation online which will show the warning signs.”

When asked about programs that are available to youths, Rev. Robbie Cade Furdge said, “It’s ok to aspire for success but there has to be a boundary.

“We can’t teach people what they don’t have. If they don’t have a sacrificial spirit, you’re not going to mentor them. If you’re not a person who is village-minded and you’re only concerned about your two and no more, then there’s not going to be mentorship. Not only in our community, but I believe our churches have the power to create mentorship. That’s what the church is for. Natchez has 300 churches in the Miss-Lou. With all the mentorship programs, we have the people to do it.”

Patten added, “You have to go where the kids are. We have to meet them where they are, and when we meet them don’t let it be one time. We must be consistent in our caring when we go to them. It’s not going to be a thousand to win these kids over. It’s going to be certain ones who will reach certain people. We need to identify these groups who can go there, and let’s put some effort and support to go there.”

The panelists consented that a current challenge is people aren’t coming to church. Parents aren’t bringing their children to church. When asked, “What would be some reasons to make children start coming to church,” they said churchgoers have to become more open-minded in order to help the youth.

Monday evening’s event was open to the public. Malcolm Inniss, the owner of WMIS 97.7 “The Beat” and WTYJ 1240 “The Buzz” radio stations, served as the moderator. The panel discussions were a part of the Opening Night of the 2022 Spring Session. Rev. Melvin White serves as the Moderator of the AMB Association.