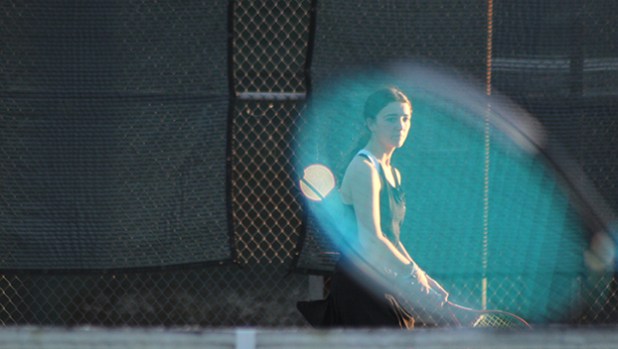 Gracie Foster looks through a St. Al racket before returning a shot Thursday afternoon. She won her first varsity match with mixed doubles partner Brady Gamberi. Foster is a senior and in her first year playing. (Hunter Cloud | The Natchez Democrat) 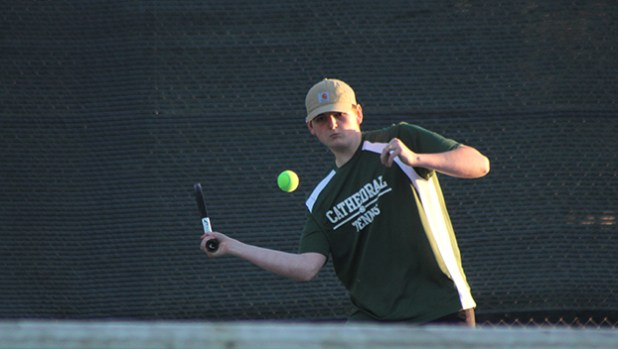 Cathedral senior Brady Gamberi goes to hit a ball against St. Al Thursday afternoon. He had a different playing partner in mixed doubles than normal but they managed to hang on and win. (Hunter Cloud | The Natchez Democrat)

Brady and Foster were the last varsity court to finish Thursday as all eyes were on them. Brady typically plays with a different partner but she was sick so Foster moved up to play with him.

It is her first year playing tennis even though she is a senior. Her mom Beth Foster is the head coach of the Green Wave. Brady said it felt good to get the win.

He talked with his new partner at the end of the first set, in which they lost 4-6, about keeping their composure and fighting. They came out of that break and won the second set 7-5 and then the tiebreaker 10-6.

It was the first time Foster played in a tiebreaker, and she said it was confusing. Tiebreakers in tennis have slightly different rules than a typical game as teams play to points.

“We had nerves. I was trying to swallow them down and focus on playing the game,” Brady said. “I was here to just have fun. It’s fun to play with someone who has never played before. You can teach them the way to do things. It’s fun to teach someone and help them out.”

Before the match, he calmed Gracie’s nerves Wednesday night by texting her they would do well, and she had to play hard, she said. The two seniors played hard and scrapped back into the match.

Foster was bubbling with energy after her match. It was the first tennis match she won, she said. A soccer player, she has taken an alternate role if someone is sick and misses a match.