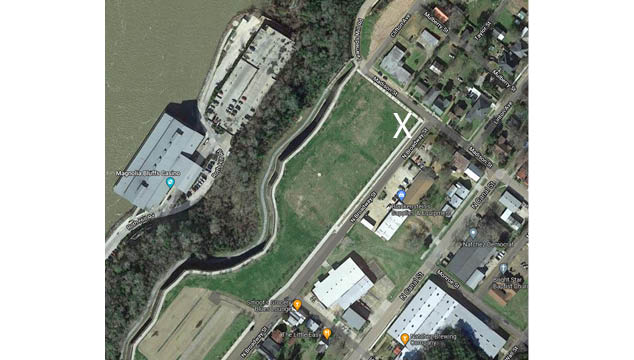 This site, at the corner of Madison and Broadway streets near the bluff, was selected for the location of the U.S. Colored Troops Monument. (Submitted)

NATCHEZ — The U.S. Colored Troops Monument will be located at the corner of Madison and Broadway streets, the Board of Aldermen approved on Friday.

The site selected was recommended by Ser Seshsh Ab Heter-Clifford M. Boxley, who is widely credited with championing the Forks of the Roads Enslavement Markets sites from forgotten to what they are today, part of the National Park Service.

Boxley is also credited with leading the discussion of recognizing, celebrating and teaching tourists to Natchez about the history of the city’s African Americans and their many contributions here.

Boxley said the location of Madison and Broadway is directly adjacent to the southwest end of the Union Army Fort McPherson.

Heath said the site met all of the selection committee’s criteria, such as potential future development and accessibility, but was the most significant because of its connection to the U.S. Colored Troops.

“The Colored Troops’ camp was located just below that site and they would come up the hill and drill with their white counterparts in the Union Army (on the site),” Heath said.

Several aldermen and Mayor Dan Gibson praised Boxley for his work, which led to the Forks of the Roads national park site and awareness of the forgotten stories of enslaved citizens of Natchez.

“I appreciate Mr. Boxley, who is an authority on this,” said Alderman Billie Joe Frazier.

The official approval of a site will allow the committee’s design selection group begin its work on getting proposals for the monument’s design.

Less than three days left to qualify for next county election