MARCHING ON: Krewe of Killarney parade coming back on St. Patrick’s Day 2022 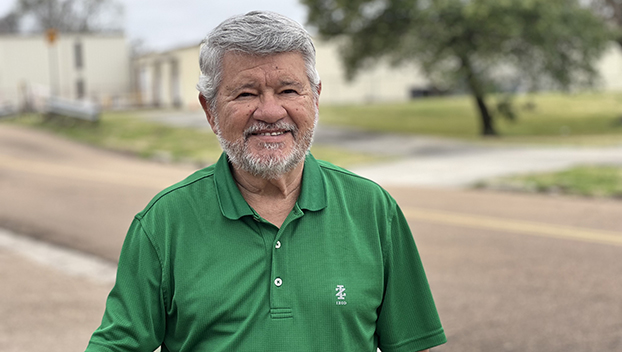 Kevin Friloux said he is honored to be this year's St. Patrick when the annual Krewe of Killarney parade makes its comeback Thursday after a two-year hiatus due to the COVID-19 pandemic. (Sabrina Robertson | The Natchez Democrat)

Kevin Friloux is still growing out his beard to resemble St. Patrick in the Krewe of Killarney parade on St. Patrick’s Day.

However, he is short in stature and plans to wear his green St. Patrick outfit and carry a cane with a snakehead ornament on top as he marches from St. Mary Basilica to the Natchez Bluff, where he will “rid Natchez of all the snakes,” by tossing them over the bluff, he said.

Friloux, looking back on a list of every St. Patrick to have marched before him, says he is to be the first Cajun St. Patrick in the parade.

His mother’s ancestors came from the Canadian province of Nova Scotia in the mid-1700s, he said. Friloux was born in New Orleans and lived just outside there in Luling, Louisiana, until he moved to Vidalia, Louisiana 14 years ago. There, he is a member of Our Lady of Lourdes Catholic Church and serves actively in the Knights of Columbus. Through the Knights of Columbus, he joined the Krewe of Killarney—the organizers of the annual foot parade where people walk from Memorial Park at St. Mary’s down Main Street to the bandstand on the Natchez Bluff while tossing beads and trinkets along the way.

“The krewe is designed to be a social group while raising money for several charitable organizations, including Holy Family Early Learning Center and Pleasant Acres Day School,” Friloux said. “We also give scholarships to four different high school students each year.”

Friloux has served on the Concordia Parish Police Jury and his wife, Angie, was the assistant to the Vice President at Copiah Lincoln Community College and active in the Vidalia Garden Club, he said.

He said it’s an honor to serve as the 31st St. Patrick in the parade after all of the great men who came before him, particularly after the parade was canceled for the last two years due to the COVID-19 pandemic.

“It was a surprise to me when I was first asked to be St. Patrick,” he said. “I met almost all of the past St. Patricks who are still living and they’re all good quality people who have the community interests in their hearts.”

The late Senator Bob Dearing was St. Patrick in 2019 before Friloux. Dearing died the following year at the age of 85.

“He was a good man, well-liked in the community,” Friloux said of Dearing. “He was a politician well respected by everyone, no matter their political affiliation. I enjoyed getting to know him.”