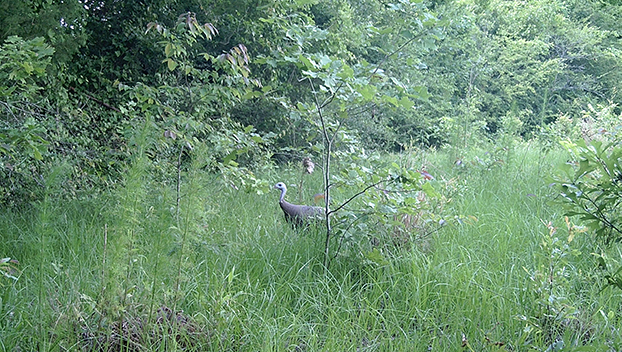 A hen walks through a field in Lincoln County last summer. Each summer, the Mississippi Department of Wildlife, Fisheries and Parks conducts surveys on broods to see how many poults are with hens in the local turkey population. This data factors into their turkey season forecast two-years down the line, Wild Turkey Program Coordinator Adam Butler said.

JACKSON — Southwest Mississippi has long been some of the state’s best habitat for turkeys. This is indicative of the harvest trends of the region. In 2020, Adams County reported 273 harvested gobblers, Lincoln County had 221, Franklin had 263, Claiborne had 199, Jefferson had 191 and Wilkinson had 176 harvests according to data published in the MDWFP “Spittin’ and Drummin’” Wild Turkey Report each year.

Mississippi Department of Wildlife, Fisheries and Parks turkey program director Adam Butler said the department conducts an annual brood survey in the summertime during July and August to see how the turkey hatch was for the year. They use this data to estimate how many turkeys will be in a population two-years later.

In 2020, 197 hens were observed in Southwest Mississippi. Approximately 34 percent of these hens had a brood with a total of 273 poults produced according to the 2021 report. Southwest Mississippi had a rate of 1.4 poults per hen in 2020. This was 30 percent lower than the five year average for the season.

Hunters in the Spring Gobbler Hunting Survey reported sightings of jakes, juvenile male turkeys, at a rate of 8.4 birds per 100 hours in the field in 2020. It was the lowest rate since 2014 for the region. SGHS and hatch survey data predict a tough spring season in 2022 for the Southwest region of Mississippi.

“Different parts of the Southeast are seeing a decline,” Butler said. “My guess is it is a combination of things. In the last couple of years we have had several sick turkeys reported. It comes and goes in populations. Over the long term there may be habitat changes. We don’t have a handle on why turkey numbers go up and down. My guess is in the southwest region, we had a succession of not good hatches. The stars all aligned naturally. I don’t think the sky is falling.”

“Ultimately, the turkeys we are going to have are dictated by how well private land owners manage their property. We need to manage hardwoods and pine stands with timber thinning and prescribed burning,” Butler said. “It requires opening up fields for the breeding season and travel corridors for turkeys to get to their different habitats. Habitat management will determine the number of turkeys you have.”

Land owners who want assistance in habitat management have resources through the state that are available. Mississippi Department of Wildlife, Fisheries and Parks provides on the ground visitations and will make recommendations as will the Mississippi State University Extension Service. They are options all people can utilize to create turkey friendly habitat.

Other factors to consider

Every year about 5,000 to 7,500 turkey hunters take to the field and write down their observations of turkeys, the number of hens, jakes, gobblers they hear or see. When a hunter kills a bird they are asked to measure the spurs of a gobbler to help determine the age of gobblers within a turkey population. Last season’s harvests may have been down due to a winter storm that hit in February.

“I think it influenced things last year. A late spring caused turkeys to be a little behind schedule,” Butler said. “It was off from the norm as a gobbler. I feel like it influenced last season to some degree. I don’t think it will have a long term impact.”