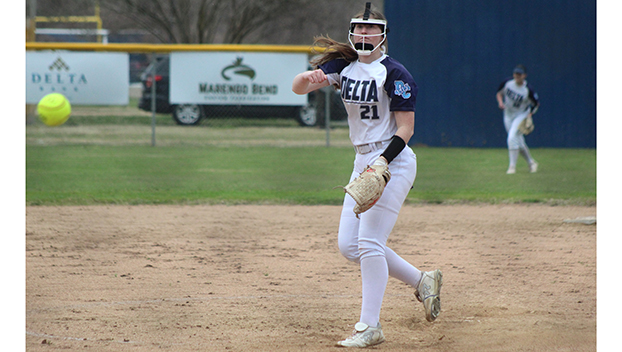 Delta Charter's Jayden Boydstun had five RBIs, three hits, a home run and a double as a batter. She also earned the win as a pitcher in three innings of work with six strikeouts. Delta Charter won 15-0 over Mangham Monday afternoon. (Hunter Cloud | The Natchez Democrat)

FERRIDAY — Delta Charter softball didn’t hold anything back when they played Mangham Monday evening. Umpires ended the game as a mercy rule when the Lady Storm scored their 15th run to win 15-0.

Jayden Boydstun led the Storm with five RBIs on three hits. She had a double and hit a home run in the bottom of the first to give Delta Charter a 4-0 lead. Her three-run shot to right field was her ninth home run of the year.

“I’ve been seeing the ball real well lately,” Boydstun said. “It feels good to have a home run. All my hard work in batting practice is paying off.”

Delta Charter had 12 hits in the game, and they committed zero errors. Base runners stole 11 bags led by Sydney Burns, who had three stolen bases.

Eighth-grader Ally Atwood had a double and a home run. She went three for three from the plate with three RBIs. Her solo shot to left field in the bottom of the first inning made it 5-0

She said she is starting to get used to seeing pitches and swinging a bit early. Delta Charter is doing better, and she said she is playing a lot better than she was at the start of the year.

There is not much for the Storm to improve upon, although, Boydstun said they can always be better. The only stat line head coach Jeanie Crnkovic may be frustrated with is the 10 runners left on base in three innings.

Boydstun earned the win as a pitcher giving up two hits and striking out six batters. She had no problem finding the strike zone in the game as 69.8 percent of her pitches were strikes. One Mangham Dragon batter reached base on a walk. She said throwing strikes was the biggest help on the mound, but her team helped too.

“We are getting better and getting in sync with hitting and defending,” Boydstun said. “We have had some tough days, but we are mostly in sync. It makes a big differnce. We are on the same page, and playing in sync helps us win games.”