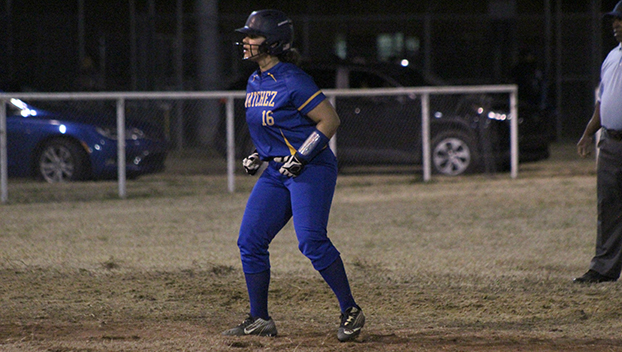 Led by Aysia Pollard and Ava Reese, the Natchez High Lady Bulldogs bounced back from being down 5-1 at the end of the first inning to take the lead in the top of the fifth inning and then hold on for a 15-13 victory over the Raymond Lady Rangers.

“I really congratulate the girls on braving out the cold weather. During the game, the temperature got colder. And it rained a little bit, too,” Hamilton said. “That was the first game we played in frigid weather. But those girls persevered.”

Natchez High took a 1-0 lead in the top of the first inning before Raymond responded with five runs off starting pitcher Camiyah Craft for a 5-1 lead. Craft settled down after that and only gave up a combined five runs over the next five innings.

“Camiyah stayed focused. She was on her pitches. She continued to throw strikes and did her job,” Hamilton said. “The girls stayed focused. At first, we were behind. Raymond was leading us.”

That allowed the Lady Bulldogs to get back in the game and eventually take their first lead since the first inning. Reese, who went 4-for-4, hit a two-run home run in the top of the second inning to make it a 5-3 game. The Lady Rangers plated one run in the bottom of the second for a 6-3 advantage.

Pollard, who led Natchez High’s 23-hit attack by going 5-for-5, hit an RBI double in the top of the sixth. The Lady Bulldogs scored two runs in that frame to go ahead 11-9. Raymond scored one run in the bottom frame to trail 11-10.

Natchez High scored four runs in the top of the seventh inning to take a 15-10 lead. But Raymond would not go away quietly in the bottom of the seventh.

“We got the first out, which was good. The second batter got on because of an error. They were able to score three runs. I told them, ‘You’ve got this’. I was proud of everybody,” Hamilton said. “The team is playing good team ball. The team has come together as a whole. They have really come together. They have confidence in each other.”

Taniyah Johnson went 3-for-4 and Jada Myles went 3-for-5 for the Lady Bulldogs. Hamilton also gave credit to a couple of coaches who have stepped in to help her.

“Coach (Randy) Craft, the football coach, is stepping in and helping out, along with my other coach, Cheree Irving. I miss my assistant coach, coach Rosetta Davis. She’s on maternity leave,” Hamilton said.

Natchez High improved to 4-1 overall. The Lady Bulldogs have a long break before their next game, which isn’t until Tuesday, March 22 at 6 p.m. in their MHSAA Region 5-5A opener at home against Florence High School.