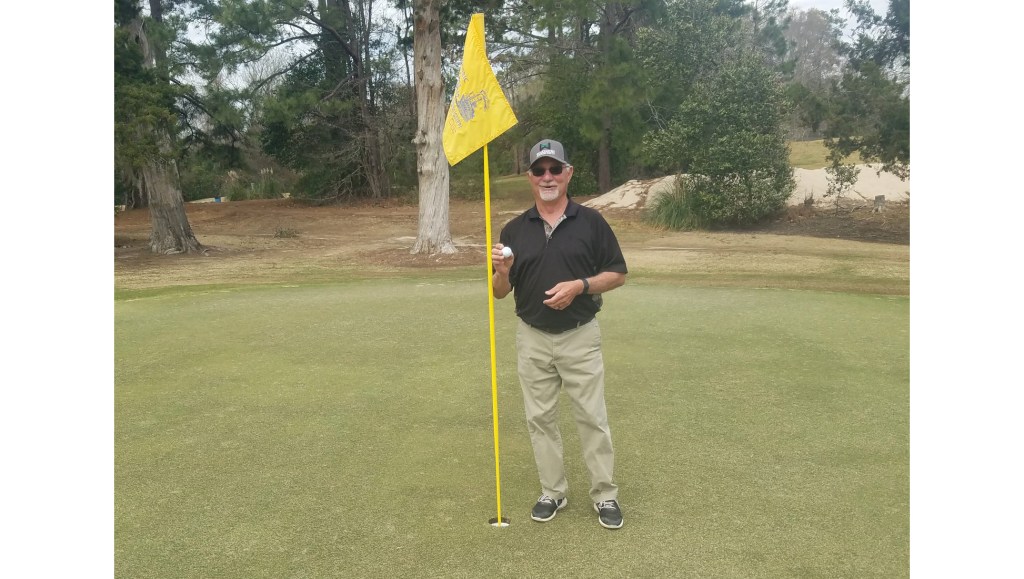 Bubba Bruce made his third hole-in-one at Duncan Park Saturday with a pitching wedge on No.13. His shot flew true to the stick, bounced and went in as the hole played 123 yards. Bruce said if he aces No. 6 he will have aced every par 3 at Duncan Park. (Hunter Cloud | The Natchez Democrat)

NATCHEZ — Golfer Bubba Bruce made his third hole-in-one on No.13 at Duncan Park Saturday afternoon. He followed up the amazing shot with a chip-in eagle on the following hole and finished the round with a 69.

Bruce said he had aced Duncan Park’s No. 15 and No. 9 in the span of two-weeks in 2018. Saturday, the hole was playing 123 with the wind in his face so he chose a pitching wedge. His golfing buddies Arlis Rogers, Danny Hankin and Al Theman were witnesses to the shot that followed.

“As soon as I hit it my friends said it was all over the stick. It made one bounce and went in,” Bruce said. “We went crazy. All three of my hole-in-ones were like I never hit them. You feel proud of yourself. In golf it is a lot of luck, it is luck it went in. I hit a good shot but luckily it went in. It makes you want to come back.”

He returned to the course the next day and was humbled by the game as he didn’t come close to a hole-in-one at Duncan Park.  His goal was to hit the greens on the back nine, he said. It is a challenge because they are small and firm.

Saturday was a different story for the back nine. He started out with a birdie, birdie then a par, a hole-in-one and an eagle. He was hitting the ball well and putts were falling. It took him 30 years to hit his first hole-in-one and now he has three in the past four years.

“I’ve been playing for thirty years and I’m starting to get up there in age. I’m trying to get in as many rounds as I can now,” Bruce said. “I enjoy being around my friends. We have a group we play with. We try to play on Tuesdays, Wednesdays and Fridays. I enjoy the camaraderie and fellowship the most.”

Bruce said his next goal is to ace No.6 which is on the front side with a water hazard.