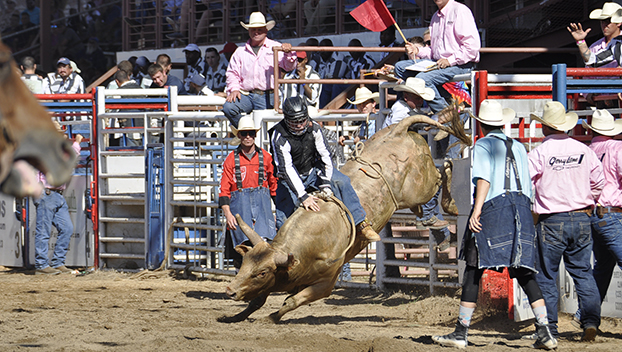 An offender competes in the bull riding competition in 2018.. (Courtesy Photo | The Angolite)

ANGOLA — The famous Angola Prison Rodeo will return this year after a brief hiatus due to COVID-19. Rodeo days are April 23 and April 24.

It is a family event that features entertainment, food and inmate-made crafts. Tickets are $20 and all limits are lifted. Anyone can attend regardless of vaccination status or age. Tickets can be purchased at angolarodeo.com/tickets/

The Louisiana State Penitentiary is located at the end of Highway 66, approximately twenty-two miles northwest of the town of St. Francisville, Louisiana (Highway 61).

History of the rodeo

Angola Prison held its first rodeo in 1965 and is the longest running prison rodeo. Tickets were first sold to the event in 1967 when the public was first allowed to watch the rodeo. All proceeds from ticket sales went to the Inmate Welfare Fund. This fund helps the recreational and educational programs for inmates.

Louisiana State Penitentiary built its first arena in 1969 to seat 4,500 spectators. A new arena has been built to house more than 10,000 spectators. According to the rodeo website it serves as a “behavioral incentive to reward offenders with good behavior to compete in various rodeo events, earn money in the competition, and sell hobbycraft, inmate-made furniture, art, and jewelry. Inmate participation is entirely voluntary. Many offenders see the rodeo as a rare opportunity to feel a part of society outside of the gates and take pride in showcasing their talents.”