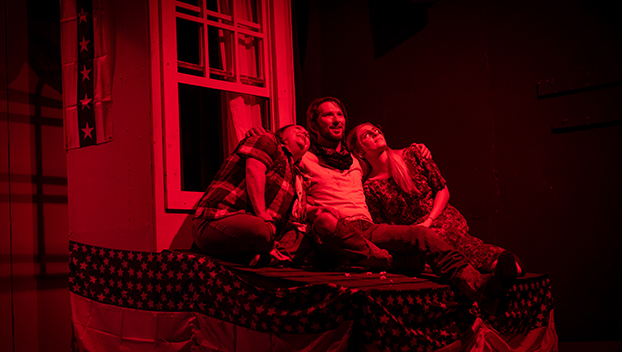 Nicole Harris as Carnelle, Devin Arnold as Delmount and Anna Simmons as Popeye watch the fireworks during a performance of "The Miss Firecracker Contest" at Natchez Little Theatre. (Photo courtesy Allen Laird)

NATCHEZ — Carnelle, played by Nicole Harris, has already sized up the competition and thinks she is sure to win Brookhaven’s annual Fourth of July pageant called “The Miss Firecracker Contest.” She is getting up in years and it’s her last chance to go out with a “blaze of glory,” Carnelle says in the play. However, things don’t go as planned.

Tonight at 7:30 is the opening of “The Miss Firecracker Contest” at Natchez Little Theater at 319 Linton Avenue.

The Natchez Little Theatre, founded in 1932, has been around for 90 years and is celebrating its 73rd season of live performances with the debut of a show never before performed on its stage, Director Michael Gray said.

“The story is about love, redemption, forgiveness and accepting yourself,” Gray said, adding the last “is the biggest message.”

“The Miss Firecracker Contest” is a story set in 1984 Brookhaven first told by a Jackson native and well-known playwright, Beth Henley, and mentions Natchez several times.

“She wrote this play and also wrote ‘Crimes of the Heart’ and both were made into films in the late 1980s,” Gray said. “I pitched the idea of doing this play because it’s relatable and it’s local. We unanimously agreed this would be our Pilgrimage play.”

After tonight, showtimes are 7:30 p.m. Friday and Saturday and 2 p.m. Sunday each weekend through April 3.

Because the Natchez Little Theatre is a community-supported nonprofit, 100 percent of sales go back into the theater for other performances to come, Gray said.

Gray said the show wouldn’t be possible without some off-stage talent as well.

Assistant Director and Set Designer Ellen Simmons worked with the Ford Center for the Performing Art in Oxford before joining Natchez Little Theatre in 2020.  She was the assistant director in NLT’s “Daddy’s Dyin,’ Who’s Got the Will?” and appeared in “The Legend of Sleepy Hollow” and “Tiny Tim’s A Christmas Carol.”

She designed a stage that can quickly be transformed from a living room to a carnival ground.

“It really put my mind to work trying to figure out how to go from an inside set to an outside one as quickly and as easily as possible, not only for me and the others backstage but also for our actors so they wouldn’t have to worry,” she said. “I used a lot of upstage for the tent and took a lot of inspiration from old circus tents for the second act, classical late 19th century tents that are made of fabric.”

Simmons said she spent upward of 150 hours designing and creating the set.

Simmons, who is working towards her master’s degree in architectural history from the University of Reading in England, has been a valued asset to Natchez Little Theatre, Gray said.

He added another asset is Scarlett Leake, who has taken charge as the light and sound manager for “The Miss Firecracker Contest.”

As such, “She has to know the script better than the actors to know what cues to look for,” he said.  A cue could be anything from a verbal line, action or facial expression in the play, all of which Leake has to look closely for to ensure a seamless and believable performance is made for the audience. Because this performance has a firework show in the script, Leake and Simmons worked to make that magic happen as well.

Simmons helped design and build a rooftop for the actors to sit on and watch fireworks from while Leake makes an indoor fireworks effect with booming sounds and special-colored lights.

Leake, who is 18 years old, has been a part of Natchez Little Theater since 2019 and has taken on every job it has to offer from acting to directing and assistant directing, stage managing and selling tickets.

“I love it all equally,” she said. “There is no small part when it comes to theater because every part is so important.”