No place to play: Playground project unlikely to be completed before end of summer 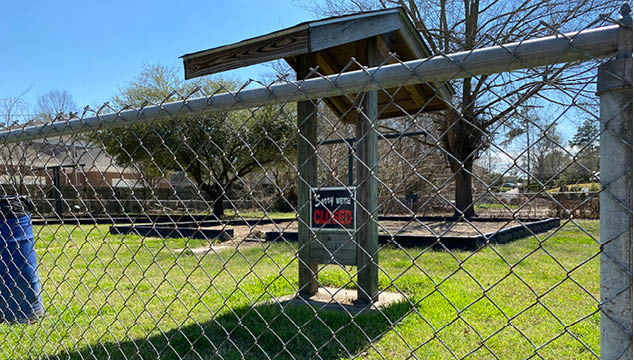 Playground equipment at Madison Street Park has been removed and a Sorry We're Closed sign tells the story. (Jan Griffey | The Natchez Democrat)

NATCHEZ — Bad news for Natchez children who hoped to play in one of the city’s parks this summer. Newly designed playgrounds and playground equipment likely won’t be installed this spring or summer.

“It is likely the work will not be done this summer. We don’t want it to take that long, but we can only do what we can do. Some things are out of our control,” said Sanora Cole, the city’s parks and recreation director.

The City of Natchez has removed almost all equipment in its parks, awaiting the installation of new playground equipment, which has yet to be ordered.

Cole said the city’s attorney, Bryan Callaway, is reviewing the Request for Proposals, known as RFP, for the playground equipment. That document is used to solicit bids from companies who plan and develop playgrounds.

“I can’t give you a direct timely, but I hope in two weeks the aldermen will approve us advertising for bids and that by May we will have reviewed the bids and chosen a company to work with,” Cole said.

She said current city park equipment was removed because much of it was unsafe or installed incorrectly.

“Anything that was unsafe or broken was removed,” Cole said. “We also needed to see what we could salvage equipment wise. When we pulled it out of the ground, we found it was buried in six feet of cement and we will not be able to reuse the majority of that equipment.”

She said the final result will be worth that wait. Parks will include safe surfaces for playground equipment and wheelchairs or walkers, so children with special needs can use the playground and equipment.

Alderwoman Valencia Hall, who is chairman of the parks and recreation committee, said all playground equipment will be compliant with the Americans with Disabilities Act.

Cole said the existing benches, picnic tables and pavilions will be renovated and all of the pea gravel that former playground equipment was installed on will be cleared out.

“We have two maintenance guys and they are doing some work on the bleachers and press box at Duncan Park. They should be finished with that prior to April,” she said.

The company who wins the bid for the project will design the parks.

“We have met with some playground specialists to determine the scope of the work we need and make sure that is within our budget,” Cole said. “It takes time. We don’t want to rush anything and have to go back and redo it. When we do it, we want to do it correctly and safely. I ask people to please have a little patience. When we are done, our parks will be some of the best they’ve ever seen. What we have coming is going to be worth the wait.”