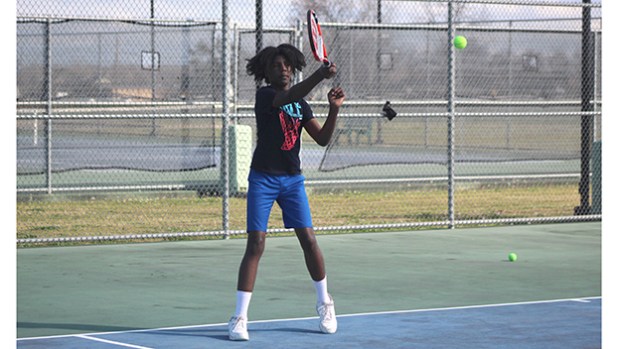 Trojan Jadarius Bright returns a volley in a match against Vidalia Wednesday afternoon. Bright is in his third year of playing tennis and is a sophomore at Concordia Parish Academy. He enjoys the competitive side of tennis. (Hunter Cloud | The Natchez Democrat) 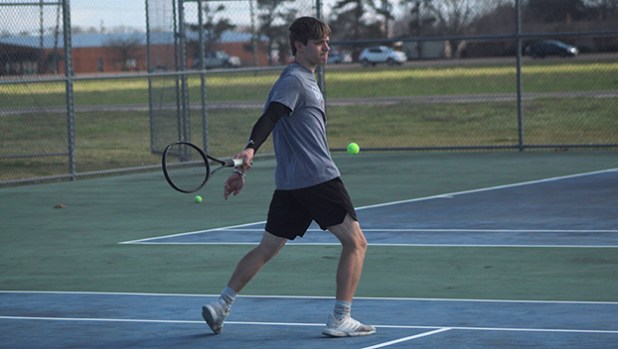 Vidalia’s Blade Miller is a junior and in his second year of playing tennis. He fell in love with the game and enjoys the physical grind of tennis. He is an Okie from Muskogee because he was born and raised there before moving to Vidalia. (Hunter Cloud | The Natchez Democrat) 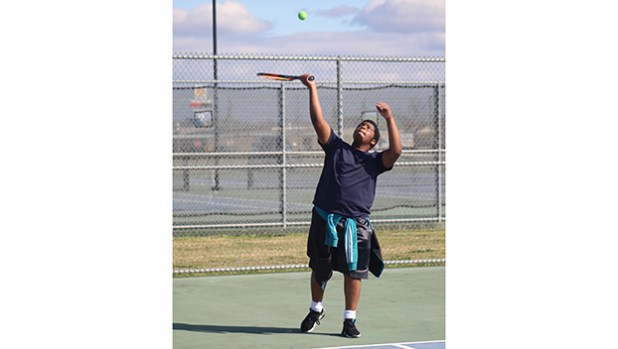 Ferriday’s Kennedy Barber is in his first year playing organized tennis. Here he serves a ball against Vidalia Wednesday afternoon. A sophomore at Concordia Parish Academy, he enjoys the social aspects of tennis, the exercise and the gentleman’s game nature of the sport. (Hunter Cloud | The Natchez Democrat) 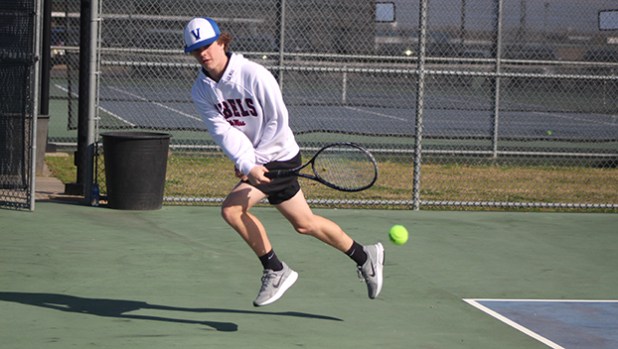 VIDALIA — A glaring sun beat down on the last doubles team playing Wednesday afternoon at the Concordia Parish Recreation Complex. Ferriday’s Jadarius Bright and Kennedy Barber were engaged in a tight battle with Vidalia’s Blade Miller and Ryan Ashley.

The sets were close, and a few had to go to deuce to determine a winner. It was Miller and Ashley who prevailed with an 8-5 win. All four players are similar in age and have played tennis for a few years.

Bright said he got his start three years ago because a classmate said he should play. It is the only sport he plays, and he enjoys the competitive side of the game.

“I’ve gotten better and way better from last year to this year,” Bright said. “My forehand has improved. I took time to focus on that. I’m working on my backhand. My serve is pretty good. I plan to continue playing tennis for fun.”

As a sophomore at Concordia Parish Academy, he has two more seasons to play for the Trojans. He said he tries to focus where he will hit the ball during a match. His goal is to make sure his accuracy stays on point.

He spends time at the Vidalia courts almost every weekday. One goal is on his mind this season.

“I want to beat the head coach BJ. He played for the team in high school,” Bright said.

His doubles partner Barber is playing his first year of organized tennis with a team. Previously, Barber had played tennis for a couple of years outside of school.

He is a sophomore at Concordia Parish Academy. Tennis serves as a social activity and a good way for him to exercise.

“Winning is fun, but I’m not super competitive like the rest of my family,” Barber said. “So far, I’ve had a good time. We have been playing with some nice people. So far, it has been good. I like tennis. It is a gentleman’s sport.”

He said Basketball and football are games people can cheer and heckle players in, but tennis is not. Fan etiquette in tennis is a lot like golf. A quiet environment helps the teamwork needed for playing doubles.

Barber and Bright play pretty well together, he said. In doubles, a player is playing for themselves and their teammate. Players have to set up shots to help their teammates, and to try and win points. It is a delicate balance.

“Usually, we use doubles tactics to set up certain shots,” Barber said. “I’m usually communicating. If I’m doing this, I want you to do this and vice versa. It is quite hard to learn. You have to be in the right mindset for it. You have to be good at communication and be straightforward.”

His goal for the season is to get better at the game. There are a lot of things he wants to improve. He wants to better his serves, volleys and footwork.

Tennis is a game where it takes practice and teaching, he said.

Vidalia’s Miller is in his second year playing and is a junior. He enjoys the process of growth in tennis. A visit to Yogi Bear Park, which had a tennis court, introduced him to the game.

During his time there, he fell in love with the game. He joined the team at Vidalia, and it has become one of his favorite sports. It is the sport he plays now.

“I enjoy the physical part of it. It is grinding every day to get better,” Miller said. “I’m a huge cardio guy. I love running and moving all over the court. I enjoy getting it shape.”

If a doubles match does take a long time to play, he gets a quick water break and keeps playing in the singles match. Tennis is a mental game, he said.

His teammate Ashley and him are playing doubles together for the first time this year. At first, it was hard to adjust to, but they have gotten used to playing together.

“We are good friends, so it is easy to communicate. He is like a brother to me,” Miller said. “There are sometimes where we aren’t on the same page. The more practice you have, the more you can do it telepathically. We are good teammates, and we figure it out.”

His goal is to make it to the state championships this year or next year. He was close last year, and the loss was the driving motivation in his practice this summer.

Instead of working in the grueling heat in the Louisiana delta, he shed his sweat in the plains of Oklahoma. His dad was born and raised in Muskogee, and he was born there too before moving to Vidalia at 11.

He has a tennis coach there, and anytime he is not in school, he makes a return to Muskogee.

Miller’s partner made a return to Vidalia this summer. Ashley previously lived in Vidalia until the ninth grade, and he moved to Bastrop, Texas. He planned to play baseball there, but his history teacher asked him to play tennis.

After talking to his parents, they advised him to try out for the tennis team, so he did. A football player, tennis has become his main sport because it is his best sport.

“It is my alone time, and when I get away from everything going on,” Ashley said. “I remember when I first fell in love with the game. At my San Antonio Tournament, I played with my best friend there. We hit some great shots.”

Miller was the first person he talked to when he moved back to Vidalia in July. They bonded together, and their friendship is pretty good.

The two separate when they play singles matches.

“It’s different. You have to make different decisions,” Ashley said. “I was a doubles player my whole life. I recently started playing singles, so my decision-making isn’t there yet.”