A family of runners: Siblings, cousins stay competitive on the track 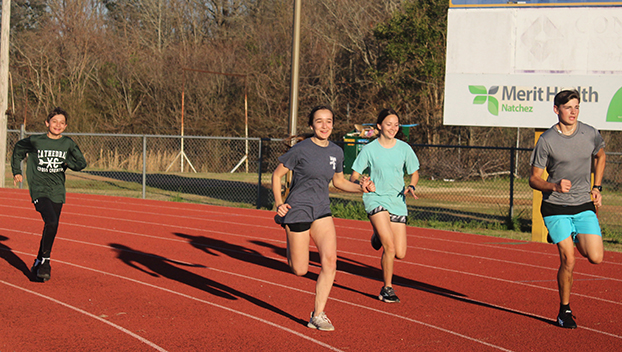 Two sets of siblings and cousins run for Cathedral’s track team. From left, Matthew Verucchi, Lizzy Verucchi, Lily Bertelsen and Owen Bertelsen run around a corner after practice Wednesday afternoon. Head Coach Tommy Smith said they are all competitors and their families are active and competitive as well. (Hunter Cloud | The Natchez Democrat)

NATCHEZ — Four Cathedral runners share a bond that goes beyond the track at Natchez High School, where they practice. Owen Bertelsen and his sister Lily Bertelsen run with their cousins Matthew Verucchi and Lizzy Verucchi, who also are siblings.

Owen said it is nice to be able to run with his family. It can be competitive at times, but it is a healthy competition.

“We can push each other. I’ve been running since the seventh grade. It’s my favorite sport,” Owen said. “I feel good when I’m running. I’m good at it, and it’s fun. My big brother ran track, and he was good at it.”

Ty Bertelsen was his older brother who was part of the 2019 4×800 meter team at Cathedral. They beat out a 44-year-old record at the MAIS state meet by running an eight-minute 28-second in the 4×800 relay. Copiah Academy set the record at eight minutes and 32 seconds in 1975.

Smith said competition runs in their family. Ty started running the 4×800 because a runner dropped out at the last second before the 2018 season. He asked him to jump in, and he ran a 2:21 in practice before shaving 11 seconds off the time at the state meet.

Owen’s family is pretty big, he has six siblings, and less than half of them are runners. His sister started running last year as a sixth-grader.

“My little sister came out of nowhere and ran a good time for a sixth-grader. She was close to me,” Owen said. “I help Lily with her form and stuff. It is nice to push her, and she pushes me too.”

Lily said she didn’t want to run at first, but her dad signed her up. She ended up liking the sport. Setting her PR of 2:47 at the Silliman Institute meet last year was the moment she realized she enjoyed running.

Her time in the 800-meter race was originally 3:07. She said she hates to lose, so she is internally motivated to compete. Her goal is to beat 2:40 this season.

“I’m just trying to beat my own time right now, but Tommy says I’m doing good. I feel good,” Lily said. “When I’m in a race and running beside someone, it pushes me to go faster and win. My brother is supportive. I can hear him on the sidelines yelling. It helps me go faster because I know he runs too, and he knows what to do.”

Smith said she has a fierceness about her that he doesn’t see in a lot of kids.

“She can’t stand to see someone ahead of her, and I love that,” Smith said. “If she can reach them, they are done for.”

Her cousin Matthew Verucchi started running track last year. He said a lot of his family ran, so he decided to run. He stays pretty active outside of track practices and meets.

This week, he injured his ankle by jumping over an electric fence in the field at his house. He is sidelined at practice this week as he tries to heal. His family is competitive and active, he said.

Lilly is closest to him in age, and they are in the seventh grade this year. When he runs, he thinks about the person in front of him. He wants to keep up with them.

Smith said he remembers one run this summer. Matthew ran a grueling route on Cemetery Road. After he ran a tough three miles out, his energy died on the way back.

“He gave everything,” Smith said. “He had a good cross country season, and he has the determination. He is very determined. It is starting to pay off. It will help our cross country team a lot next year.”

His sister Lizzy Verucchi started running track this year. She has always played soccer, but her cousins convinced her to run track. They told her it was fun, she said.

“I’ve always had a big family, but I’ve never had anything to do with my brother,” Lizzy said. “It is different and cool. We have always raced each other and competed growing up. My older sister Maddie usually wins.”

She said they catch rides together to practices and meets, and because it is her first year running track, they help her get better. They helped her get in shape for the season and learn how to pace herself in races and practices.