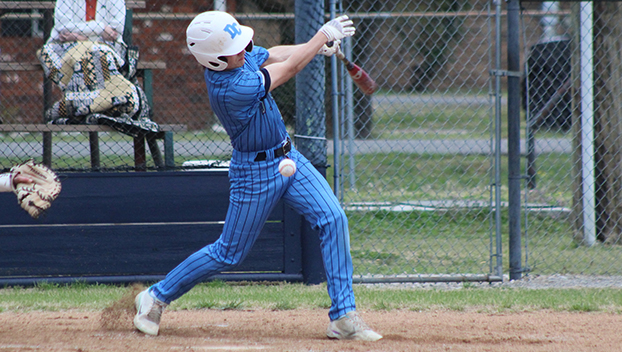 Delta Charter’s Preston Higgins was the winning pitcher against Sicily Island Thursday evening. He threw for three innings and struck out seven batters. Offensively, he had two hits on four at-bats with a home run and a double. (File Photo | The Natchez Democrat)

FERRIDAY — Delta Charter School’s varsity baseball team showed no mercy on nearby rival Sicily Island High School as the Storm rolled to a 25-0 win over the Tigers last Thursday afternoon to end a three-game losing streak.

Even though Delta Charter and Sicily Island are LHSAA District 2-1A opponents in several other sports, that is not the case this year in baseball, Storm head coach Nicholas Kennedy said.

Preston Higgins was the winning pitcher for Delta Charter as he pitched three scoreless and hitless innings. He struck out seven batters and walked only two batters. Jadyn Jones pitched two innings of relief and gave up Sicily Island’s only base hit of the game to go with one strikeout and one walk.

The defense behind Higgins and Jones was outstanding as the Storm did not commit a single error.

“Before the game, I challenged them to play a clean game, error-free baseball. And they did,” Kennedy said. “We’re hitting the ball well. The least amount of hits we’ve had in a game is like eight or nine hits. We’re taking good approaches at the plate. But we’ve had problems making routine plays. That’s what has hurt us.”

Bass allowed 14 runs, only four of them earned, on 10 hits with one strikeout and one walk. Sicily Island pitching gave up a total of 17 base hits and the Tigers’ defense helped the Storm by committing 10 errors.

Delta Charter had another double-digit scoring frame in the bottom of the fourth inning, scoring 11 runs to make it a 25-0 game.

“I put some guys in positions that they normally don’t play. We had good pitching. It was an all-around good game,” Kennedy said.

Delta Charter (3-7) takes a short trip to Jonesville, La. to take on the Block High School Bears on Monday, March 21 at 5 p.m.