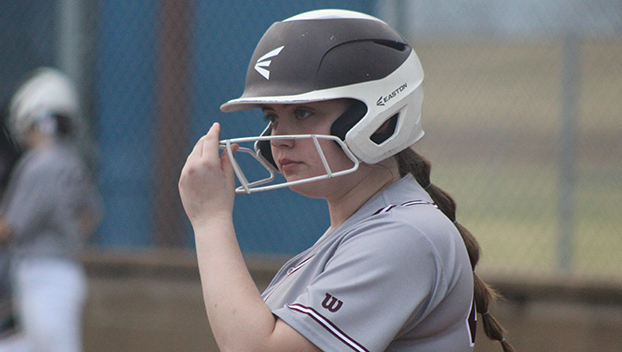 Lady Wolve’s Briana King threw six innings, struck out seven batters and gave up one earned run in Monterey’s 14-4 win over Glenmora Thursday evening. She was five for five at the plate with two RBIs in the game. (File Photo | The Natchez Democrat)

MONTEREY — From the first inning, Monterey’s offense overpowered Glenmora on Thursday in a 14-4 mercy rule win.

“I thought we played pretty well at the plate. We hit well and pitched well. We had a good ball game,” Shively said. “It’s a seven inning game. They had some base hits and scored runs. We were hitting the ball through the lineup. We just needed to keep the pedal to the medal and we were able to do that. Naturally, when a team scores three runs in an inning like that you do get antsy.”

His players had to keep up the hitting pressure. They responded with eight runs to close out the game. King pitched a complete game and threw 79 pitches in the contest.

“She had a solid game. Hannah and Briana both have done a great job this season. It doesn’t matter who I put on the mound,” Shively said. “Right now, we are on track to be where we want to be. I think we are getting better every time we play.”

Monterey plays Country Day University Academy Tuesday before taking on Oak Hill Thursday. Oak Hill is 2-7 this season but are a much stronger team than they appear on paper, Shively said.

Their basketball team made a deep run in the LHSAA playoffs and should have their full softball squad back for Thursday’s matchup at Monterey.

“I like this team. I think we are a decent team right now and we will get better as the season goes on,” Shively said. “Oak Hill is a really good ball club. They didn’t get their softball players until late. It should have been a good game.”

Delta Charter was on both sides of the mercy rule this week. Thursday afternoon, they lost 17-2 to St. Frederick after giving up 11 runs in the first inning. The game ended in three innings as a mercy rule.

The Lady Storm had four hits in the game and left three runners on base. Lady Warriors did not strike out a single batter in the game nor did they issue any walks.

Pyper Brown and Sophie Cooper had the only RBIs of the game for Delta Charter.