‘The lady upstairs would make a good Dart’ 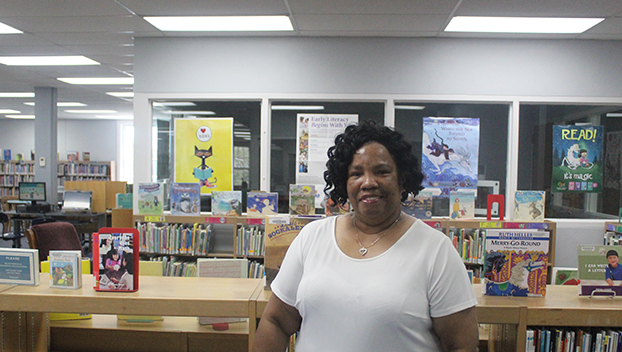 Judge George W. Armstrong Library director Pamela B. Plummer has spent 50 years of her life working and is closer to retirement, she said. She is a native of Natchez and an alum from Alcorn State and USM. (Hunter Cloud | The Natchez Democrat)

NATCHEZ — A man with a Steelers cap and a white Greg Norman shirt placed bags of mulch on Judge George W. Armstrong library’s landscaping close to where The Dart landed Friday. “The woman upstairs would make a good Dart,” he said.

In an office on the second floor, library director Pamela B. Plummer sat surrounded by stacks of grant applications. A native of Natchez, Plummer graduated South Natchez High School before going to Alcorn State as a student nine years later.

She received her BA in literary arts and masters in teaching. For 26 years, she worked for the university. Her start was in the school’s learning skills center before moving to the library. She earned a library science degree at the University of Southern Mississippi in 2005.

“At Alcorn, I applied for an available position before moving to the Library. I enjoyed reading. Over the years, I would read more and more,” Plummer said. “It is what got me into a love for reading. The most ironic thing is, I can’t find the time to read. I have other things I have to do. I don’t have time to read like I would like to.”

As director of the Armstrong Library, Plummer said she has to ensure there are computers, copying services, and a clean environment for patrons. Her time is removed from the library floor as she works on grants in her office.

Thankfully, she has a staff who take care of the public. She said she likes to come in on a Saturday and work when it is quiet because she can get more done then.

Additionally, she volunteers with Delta Sigma Theta sorority or Holy Family Church in her spare time.

“I like spending time with my husband. My sorority keeps me busy a lot,” Plummer said. “Delta Sigma Theta is a lifetime commitment. It doesn’t stop because we graduate. We have programs that keep us busy. They keep me busy.”

She and her husband, Robert, have been married for 49 years.

And as she looks ahead to retirement, Plummer considers having more time for reading, among other pursuits.

“I think the first couple of weeks, I’ll sleep and rest and enjoy being home,” Plummer said. “I plan to travel to visit siblings and my kids. I’ll enjoy being home. I’ll learn how to develop a green thumb like my husband …

“He is downstairs working on the landscaping now.”