Davis snaps out of slump as Natchez rolls past Port Gibson, Crystal Springs 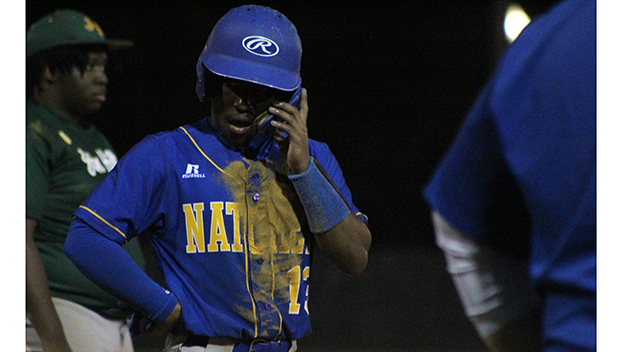 Bulldog Jaylin Davis went 3-3 against Crystal Springs and pitched 3 ⅓ innings as Natchez beat Port Gibson 7-0 and Crystal Springs 17-6. Head coach Dan Smith said he had been in a slump lately but came up big at the plate Saturday. (File Photo | The Natchez Democrat)

In what was essentially a final tune-up for the varsity Bulldogs as they venture into the MHSAA Region 5-5A portion of their schedule this week, they shut out the Port Gibson Blue Waves 7-0 and then used a nine-run fourth inning to pull away for a 17-6 win over the Crystal Springs Tigers in five innings.

“We played pretty good overall. We didn’t have many errors,” Natchez High head coach Dan Smith said. “That’s the good thing about those two games. We had a few walks. The first game, we had a few mental errors. But we threw strikes and played good defense.”

When Smith realized that the Bulldogs did not commit a single error in either of the varsity games, he said, “That’s the first thing I look at, is how many errors we have.”

Jwun Mackey had a home run for his only base hit in four at-bats. He had three runs batted in and scored one run. Winning pitcher Rodrick Simpson pitched four innings of shutout ball, struck out seven and walked two. He also went 3-for-3 at the plate. Jaylin Davis came on in relief of Simpson and in two and thirds-innings struck out five batters and gave up just one hit and he had a double at the plate.

“Jaylin Davis came through big. He’s been in a slump lately. He hit the ball well Saturday,” Smith said. “He pitched well, too. He came in and closed (both) games.”

Despite having 13 total base hits, Natchez High left nine runners on base. And that was the one thing Smith was disappointed with.

“We hit the ball pretty well. That’s what we worked on in practice,” Smith said. “I was a little disappointed on that aspect (nine runners left on base). We left the bases loaded a couple of times. We left runners in scoring position. Not upset, but kind of a little irritated. With bases loaded and no outs, we have to get runners across. Whether it be a walk or a bunt.”

Ronnie Mackey was charged with the loss on the mound for the Blue Waves after giving seven runs, all of them earned, on 11 hits with six strikeouts and three walks. He also went 1-for-3 with a double.

The second game saw Natchez High take on Crystal Springs. And, surprisingly, it turned out to be a good game for three and a half innings.

The Bulldogs jumped out to a 6-0 lead in the bottom of the first inning. It stayed that way until the Tigers responded with a five-run rally in the top of the third inning to trail by just one run.

“In the first inning, our bats were still hot from the Port Gibson game,” Smith said. “In the third inning, they scored five runs. We had a couple of walks, but they put the bat on the ball. I told my kids they have to score to win.”

“In the bottom of the fourth, my 3, 4 and 5 hitters (Mackey, Mason Bouldin and Simpson) had some big hits. We got runners on and got the runs in this time,” Smith said. “Mason, an eighth-grader, had an RBI that inning. We have some eighth-graders on our team. The more they play, the better they’re going to get.”

Davis went 3-for-3 with two doubles, two RBIs and three runs scored while on the mound he pitched one inning of relief with two strikeouts.

Mackey was the winning pitcher despite allowing six earned runs on eight hits and four walks in four innings. He also struck out six batters. At the plate, Mackey was 3-for-4 with a double, four RBIs and three runs scored. Davis and Mackey led the Bulldogs’ 18-hit outburst.

Natchez High (4-3-1) is scheduled to play at Florence High School in its Region 5-5A opener on Tuesday with the JV game at 5 p.m. and the varsity game at 7 p.m. However, the forecast of severe thunderstorms throughout the state on Tuesday afternoon and evening will likely force that game to be pushed forward a day.

“I talked to their coach on Sunday and it looks like it will probably be moved to Wednesday,” Smith said.

If the games are indeed rescheduled, they will still take place at the same times as they would have on Tuesday.