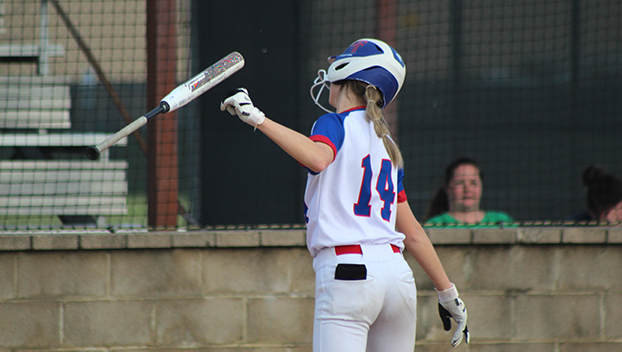 Vidalia’s Allie LeBlanc lets her bat slip out of her hands on a called third strike to end their game against LaSalle. The Lady Vikings fell 11-1 after the Lady Tigers scored nine runs in the top of the sixth Monday afternoon. Head Coach Taylor Rodgers noted the game lasted longer than the last time they played each other. (Hunter Cloud | The Natchez Democrat)

VIDALIA — LaSalle beat Vidalia 11-1 in a comeback win Monday afternoon.  The Lady Vikings opened the game with a one-run first inning to take the lead, but the Lady Tigers opened the hitting floodgates in the top of the sixth to win.

Vidalia’s Head Coach Taylor Rodgers said she was proud of her team. Previously, they had lost to Lasalle in three innings. The difference in the game was LaSalle strung hits together in the sixth inning.

“They just started hitting well. They have always been a hitting team and we made some errors that gave up a few more runs,” Rodgers said. “They hung with them for six innings. The girls played well. I can’t complain about their performance one bit.”

LaSalle had eight hits in the game and left 17 runners on base. Vidalia made seven errors as a ball club, and one run of the 11 runs LaSalle scored was an earned run.

In the circle, Allie LeBlanc started the game for the Lady Vikings and pitched four innings, striking out one batter and yielding three hits. Madelyn Fielder tossed two innings and gave up four hits. She also struck out a batter.

With severe weather looming in the forecast for the Miss-Lou, the Lady Vikings had to move a game scheduled for Tuesday. Wind gusts were strong in the game as one ball seemed to float a little longer before it got to the first baseman’s glove costing the Lady Vikings an out. One flyball shifted at the last second in centerfield and missed the fielder’s glove.

“Wind affected some of the balls hit to the outfield,” Rodgers said. “Some of the girls said they probably would have got some if it wasn’t for the wind. You can’t fight the wind. It is what it is. You have to play with it.”

Vidalia plays on Friday at 8 p.m. and 11:45 a.m. on Saturday in a weekend tournament to close spring break. She said her squad needs to string a few more hits together and keep their heads up this weekend. They managed three hits against LaSalle.

“I want to see some wins, and I want to have a good weekend,” Rodgers said. “They have gotten so much better about staying competitive instead of giving up halfway through.”