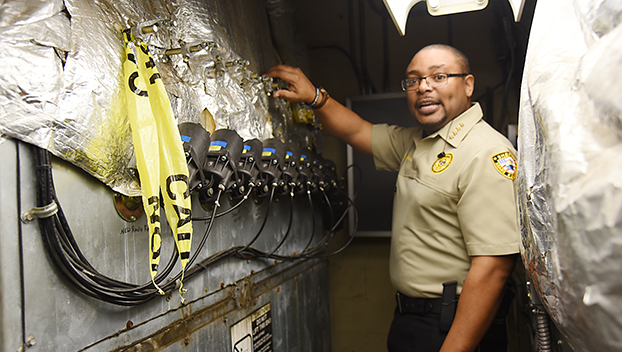 NATCHEZ — Inmates have been tearing down the light fixtures, breaking windows, jamming locks, clogging toilets and destroying television sets inside of the Adams County Jail, maintenance supervisor Johnny Williams told the Adams County Board of Supervisors on Monday.

“It’s the worst I’ve seen it in 17 years,” Williams said, adding money was being spent to fix issues only for them to get torn up again.

“It just seems like a revolving door,” he said.

Supervisor Ricky Gray also questioned the jail’s water bill, which he said was nearly $2,300 a month.

“You’d have to have water running all of the time to have a bill that high,” he said.

Adams County Sheriff Travis Patten asked supervisors for a cost-benefit analysis that would help the board decide whether improvements can be made that would stop inmates from destroying jail property or if it would be better to build a newer, more modern jail.

While the surveyor is paid hourly, Patten said the study would cost them $5,250 at most. The board approved moving forward with the analysis unanimously.

Supervisors approved a free study by Benchmark Construction in 2020. However, attorney Scott Slover said the study was biased because the company was seeking to build a new jail.

“So far, the only person that has done a report on whether you need a new jail is the person that is proposing to build you a new jail,” he said.

Patten said Detention Operations also would be looking at what it would cost to make improvements to the jail while also weighing the benefits of building a new jail, taking into account inmate safety and the county’s legal liability during the process.

“I sought out an independent inspector who doesn’t have a dog in this fight,” he said. “… We’ve got some things going on and I need an independent eye to look at it.”

While Patten has been asking the Board of Supervisors to consider building a new jail for years, he said he was not allowing the current facility to be destroyed.

“We’re not allowing anything to be torn up,” he said. “Everything that we can legally charge a person with, we’re going to charge them. I don’t want the board to think we’re letting inmates tear up the jail because we want a new facility. If we can fix this one, that’s great. … It’s just hard to watch all 80 or 90 inmates at one time with three people when they’re behind closed doors.”

Patten said a recurring problem is inmates tearing down hanging light fixtures from the jail ceiling, which he said is eight feet high. Newer facilities have higher ceilings with lights that are flush with the ceiling, he said.

“As long as you have those types of lights in there, the inmates are going to keep tearing them down because they can access them so easily,” he said. Patten and Williams suggested welding metal guard rails over the lights and windows to keep inmates from getting to them.

“We are doing the windows as they put holes in them. We have metal welded over them,” Williams said, adding at one time, he looked at putting metal over all of the windows.

“The price at that time was running over $10,000. I’m sure it has gone up since then. We haven’t come up with anything to put around the lights and we have a big problem with inmates discarding lights and finding ones to replace them because they’re so old,” he said.