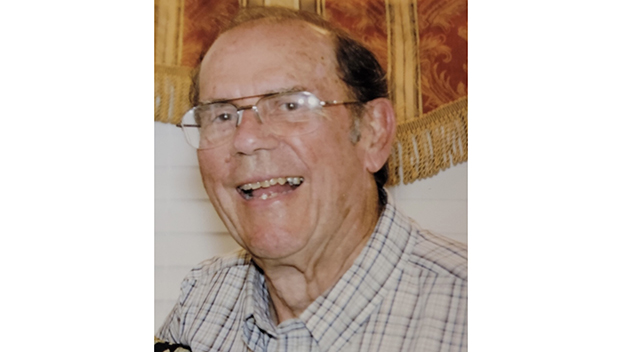 NATCHEZ – Louis Wesley Foster, Sr. was reunited with the love of his life on March 18, 2022. Chris, his wife of 70 years and 6 months died Christmas morning, 2017.  Daddy spent the last four years of his life telling anyone who would listen how long they were married.

Louis was born in Natchez on Feb. 24, 1927, to Wesley Allen Foster and Edna Wilson Foster.  He was the first of three children including his brother Jack and his sister Helen. Louis was a 1945, graduate of Natchez High School, lettering in football his sophomore, junior, and senior years.  He attended Centenary College in Shreveport, LA, Lamar College in Beaumont, TX, and LSU Banking School of the South. While at Centenary and Lamar, he participated in football. He enlisted in the United States Army June 22, 1945. He received an Honorable Discharge from Company D 349th Infantry April 23, 1947.  He was stationed in Trieste, Italy and participated in football, track and basketball while there.  He was particularly proud of the fact that their football team defeated the 82nd Airborne in January of ’46 by a score of 13-0 and again in January of ’47 by a score of 49-0.  In 1946 their division was first in track and second in basketball.  In 1947, they were first in basketball and second in track.

Louis often told the story that the reason he did not stay in the Army any longer than he did was because they would not let him return to the States to marry Christine Ashford.  Louis met Chris when he was in the 9th grade and she was in the 8th.  They dated all through high school and married on June 9, 1947. To say she was the love of his life is truly an understatement.

Football was definitely Louis’ favorite sport.  He followed Natchez High and Cathedral for many years and enjoyed radio broadcasting Cathedral games on Friday nights with his good friend Joe Eidt.   During his Natchez High football career his team won two Lions Bowl titles. Chris used to tell their friends that he could remember every score of every game he ever played – which he could – but that he couldn’t remember the birthdates of his own children, which really wasn’t true.  It was no secret that his favorite college football team was the Tigers of LSU.

Prior to retiring at the age of 86, Louis spent the majority of his employment years in finance and banking and selling cars.  Regarding his time spent in finance and banking, he once said, “I loved putting numbers together and making things balance out.”  And could he ever sell a car.  He could quickly tell you who he sold a car to, as well as the make and model.  He made many good friends during the time he worked at Williams Motor Company and Great River of Natchez.

During his Natchez years, Louis served his community with pride.  He was a former President of the Rotary Club, former President of the Chamber of Commerce, and was instrumental in bringing the film and movie industry to Natchez.  He was a member of the Miss-Lou chapter of the National Football Foundation and College Hall of Fame, Inc, and was awarded their Distinguished American Award at their annual banquet in 1996.  He helped organize the Joe Fortunato annual Celebrity Golf Classic which was a benefit for the Miss-Lou Scholarship Fund of the National Foundation Football Hall of Fame.  He and Chris were very active in the development and planning of the Fighting Five annual reunions, a gathering of high school classmates from the war years.

Louis was many things to many people.  He’s been described as, “the most incredible man I’ve ever met; showing unconditional love with a staunch unwavering faith in his values and his ability to see the humanity in everyone. Louis’ globetrotting stories would transport me all over…from the blues mecca of the Mississippi Delta to the Italian village where he was stationed during the war.” He was a great historian and passed along much information and knowledge to family and friends. Others have said that he was what they aspired to be and that he was such a joy to people; that he was a friend indeed and would help anyone out that needed help.

To say he was blessed with God’s words is an accurate description of his life.  Louis loved to minister to people, as is evidenced by his undying faith and the ability to share it with others.  He taught Sunday School at Jefferson Street Methodist Church for 40 years.  He made it his daily labor of love to contact church members on their birthdays and anniversaries to wish them well and give them a daily devotion or Bible verse.  Quite often he would leave them with his favorite verse, Psalm 91:11. He was an avid reader of the Bible and believed in what it said about the here-after.

Louis was a devoted husband and father.  He was always proud of his children and grandchildren and loved them fiercely.  He often described his marriage to Chris as the best thing that ever happened to him, and the birth of his children were two of the best days of his life.  Late in life, he enjoyed sitting on the front porch with Chris and watching the river and all the birds.

Louis was passionate about music and poetry.  Before his sight became so bad, he wrote poetry, stories, and songs.  He loved to put thoughts on paper. It was often said he missed his calling. He won first place at the Mississippi Health Care Foundation Resident Convention in 2019 for a song he wrote and performed that he titled Sugar Man. He often wrote poems for residents and staff at the nursing home where he resided.

Louis remained active while in the nursing home, even after Chris passed away. While there, he led the residents in devotion, Bible reading, and hymn singing; sometimes twice a week.  He was selected as “Mr. Willow Creek” in February 2018 when they had their Prom. He would listen to music daily, sharing his albums and CDs with anyone that would listen.

In lieu of flowers, the family requests donations be made to Jefferson Street United Methodist Church or Pleasant Acre Day School.