Not much to say: Rebels give up 13-runs in second inning, have one hit 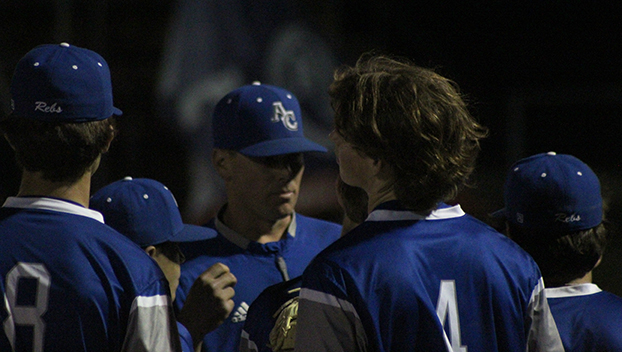 AC Head Coach Jake Winston talks briefly to his team after a 19-0 loss to Copiah Academy Monday evening. The Rebels had one hit in the game. It was originally scheduled for Tuesday but was moved up due to inclement weather. (Hunter Cloud | The Natchez Democrat)

NATCHEZ — Copiah Academy used 13 hits to push 19 runs across the plate in a 19-0 victory over Adams County Christian School Monday evening. A 13-run second inning sealed the fate for the Rebels.

Head Coach Jake Winston didn’t have anything to say about the loss, and how could he. The stats talk for themselves as AC had one hit, a double by Colin Aplin in the fourth inning.

Another runner would reach in the bottom of the fourth to join Aplin on the basepaths, but they never made it home. It would be the fate of nine AC batters who reached base.

Throwing errors were costly as they advanced the Copiah Academy runners. AC needed five pitchers to get through their game against Copiah Academy.

AC Headmaster David King reminded the team to play for pride. He asked McGruder to step up and be an example for the kids in the dugout and the kids watching from the stands.

The game against Copiah Academy was moved up a day because of a storm brewing, and it may take the Rebels catching lightning in a bottle to right the ship. One poor inning has been the difference in many of their defeats this season.

Game slips away from Lady Vikings in sixth inning,…