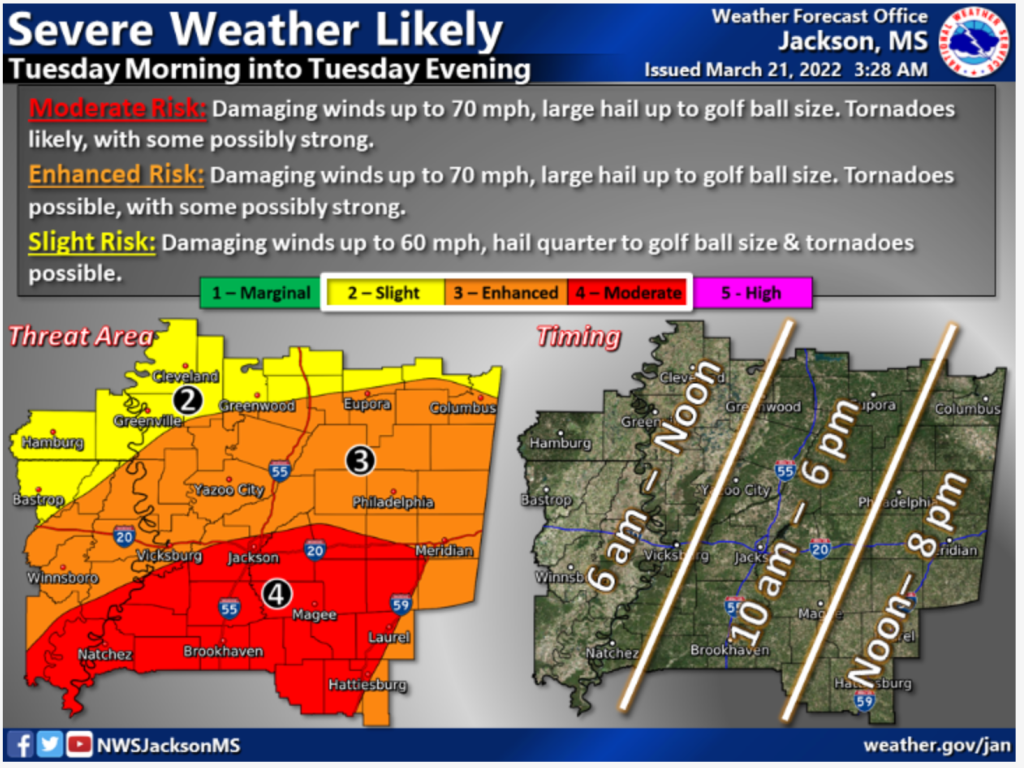 NATCHEZ — Natchez and Adams County are in the middle of an area the National Weather Service says has a moderate chance for severe weather on Tuesday.

Robert Bradford, director of Adams County Emergency Management Agency, said his agency has reached out to area schools and asked them to delay opening or to use virtual learning on Tuesday.

“We have made the request and are waiting to hear back. We have also asked the city and county to delay the opening of their offices until 1 p.m.,” Bradford said.

He said the Adams County Safe Room on Liberty Road by the Natchez High School will be open at 8 a.m. for those who need shelter and the Emergency Operations Center will begin work at 8 a.m. Tuesday.

Part of the expected bad weather on Tuesday is a flash flood warning. Bradford said residents who need sandbags for their homes can go today to the city barn on Old Washington Road, the Adams County Road Maintenance Facility on Majorca Road or the Volunteer Fire Department on Foster Mound Road to get them.

“The most important thing is have a plan as to what you are going to do to keep you and your family safe,” Bradford said.

Today is a good day to make preparations for storms that could potentially bring tornadoes.

“You need to have multiple sources of weather information available to you,” said Joanne Culin, a meteorologist with the National Weather Service office in Jackson.

“Know where you are going to go to stay safe if we put out a warning.”

Stormy weather could begin here as early as 6 a.m., but Culin said it’s likely to be closer to 8 or 9 a.m.

“We are expecting a strong line of storms with damaging winds as high as 70 miles per hour,” Culin said, which could result in tornadoes that could be strong.

Temperatures at daybreak Tuesday will be in the upper 60s to 70, the National Weather Service predicts, and will remain warm in the mid 70s through the day.

The area is also under a flood warning through March 27 and a wind advisory through the day tomorrow.

New rainfall is expected to be one to two inches.

“It looks like the worst of the weather should move out of your area by noon, with lingering rain through the afternoon before clearing out in the evening,” Culin said.