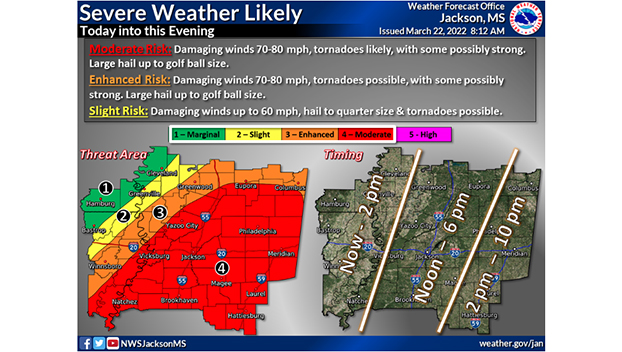 NATCHEZ — The City of Natchez and Adams County officials announced today that all city and county business offices will remain closed until Wednesday due to severe weather.

The regularly scheduled meeting of the Mayor and Board of Aldermen tonight at 6 p.m. in the City Council Chamber should still take place as planned provided the storm has passed, officials said.

A local State of Emergency has also been declared, allowing city departments to effectively respond to weather-related emergencies during and after the storm.

A wide area covering most of Central and South Mississippi and Louisiana is under a tornado watch as a large storm system moves through the area Tuesday afternoon. A watch was announced by the National Weather Service office in Jackson just before 11 a.m. and lasts until 2 p.m. this afternoon.

The affected area includes all of Adams County, Concordia Parish and surrounding areas.

“We may experience severe weather today between the hours of 12 and 2 p.m.,” he said. “We can expect tornadoes, hail, and winds up to 70 miles per hour and we’re asking everyone to have a plan. Have at least 72 hours’ worth of supplies ready in the event of a prolonged power outage. Also, if you live in a mobile home or manufactured home and want safety, the Adams County Safe Room is open at 8 a.m. until the event is clear. In the event we get tornado warnings, we’re asking everyone to take shelter and find a safe place to ride the storm out. Do not attempt to come to the Safe Room during a tornado warning.”