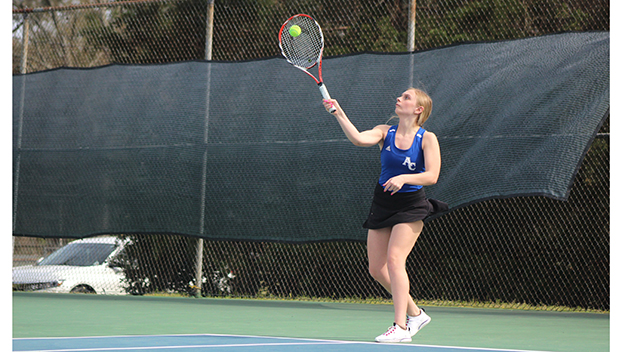 AC’s Ginny Borum makes a serve in a match against St. Aloysius Monday afternoon at Duncan Park. The Rebels did not win a court but they stayed after the match to practice which their head coach took as a win. (Hunter Cloud | The Natchez Democrat)

NATCHEZ — Adams County Christian School did not win a single court in their tennis match against St. Aloysius at Duncan Park Monday afternoon. Instead, they found a win in their actions after the match concluded.

Players could have gone home upset or disappointed with how they played Monday afternoon. Head Coach Nicole Gatson said they opted to stay and practice for an hour afterward.

It was true dedication after many of them played exhausting sets. She said any time she walked to a new court, kids played to deuce in a game. Their actions made her proud.

“To me, that is a win. They just want to be better than they were,” Gatson said. “They saw mistakes they made and wanted to correct them. I loved seeing them want to stay.”

Rebel tennis players spent their spring break practicing, so the break was not an excuse for any mistakes they may have made. Gatson said some of her kids wanted to practice every day, so she made it happen, weather permitting.

Every kid who played against St. Al came to practice, she said. The Flashes were just better than they were on the court. It is the big picture Gatson is most concerned with.

Game slips away from Lady Vikings in sixth inning,…