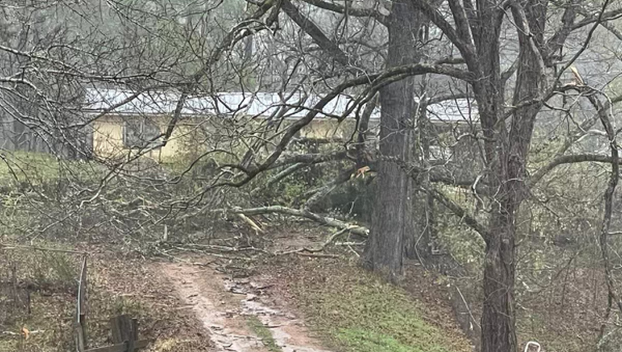 Tree branches cover a private drive on Spokane Road during a severe storm last week. The south has been battered by three consecutive weeks of bad weather.(Submitted photo)

NATCHEZ — It seems as though the Miss Lou survived the worst of a large storm system that moved through most of South and Central Mississippi and Louisiana.

The worst of damage appears to have been fallen trees, tree limbs and power lines.

At one point, Entergy reported just over 1,600 of their customers in Concordia Parish lost power and were restored by mid-afternoon. It appears none lost power in the immediate Natchez area but hundreds did in Adams County.

Southwest Electric Cooperative spokesperson Deb McGee said at the height of the storm 4,854 meters were out across Southwest’s service area and all but 2,700 meters were restored by 3 p.m. In Adams County, 908 meters were still out after 3 p.m.

McGee said 402 of those are the result of a broken pole on Ogden Road, which linemen are replacing.

“Those should be back on by tonight and the majority back on by tomorrow night unless we find something out,” she said. “We’re still assessing damage.”

Adams County Liaison Officer Neifa Hardy said there have been numerous reports of trees and power lines down, mainly in the county and some in the city.

“There have been multiple downed trees and some power lines on Ogden Road, trees down at St. Mary’s and North Rankin, trees and possibly power lines across a private drive on Spokane Road and everything west of Lower Woodville Road is without power,” Hardy said amid the storm. “On Liberty Road between Jeanette and Cutoff, half of the road is blocked and there’s a tree across state park road.”

After the storm subsided, Hardy said there had been no reports of any home or property damage or any life-threatening situations of any kind.

“Yet again, we dodged another bullet,” she said. “No one was stranded, no injured citizens. We did well and mother nature has spared us.”

“It appears that the storm has left Concordia Parish and we’ve had no reports of damage and no downed power lines,” he said. “Concordia Extension had a road closure but no residents live there. It’s sort of a backroad. It seems Concordia Parish has fared well through this severe weather.”