Cathedral struggles to hit, give up too many unearned runs in district defeat 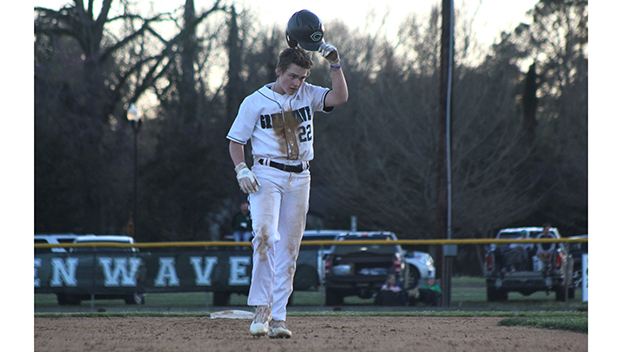 Cathedral junior Jake Harriston had two hits and an RBI for the Green Wave. His two hits were the only hits Cathedral had in a 4-1 loss to St. Joe Madison. They will look to rebound with a district double header Friday night. (Hunter Cloud | The Natchez Democrat)

Only two of the Bruins’ four runs were earned. Beesley was frustrated in the dugout with the Green Wave’s two errors.

“Sometimes you don’t know with these kids. they didn’t show up to the ballpark ready to play,” Beesley said. “We have to show up and be able to compete. The kids have to be where their feet are, and that is the ballpark.”

Cathedral junior Jake Harriston led the team in hitting with two hits and an RBI. He was the only Green Wave batter to reach base with a hit. St. Joe’s pitcher was throwing an occasional off-speed ball on the first pitch, so he sat on the fastball.

Harriston was in a batting slump before the game. Those two hits may have helped him snap out of it. He said he saw the ball well and took advantage.

“It felt good to put the ball in play,” Harriston said. “We just have to work better as a team, and see the ball.”

Beesley said the rest of the team did not compete enough at the plate. The team’s mantra is to compete this season. First-base coach Wright Graning and Beesley yell out “compete,” to each batter.

He felt they didn’t compete in the batter’s box and had too many strikeouts. Nine Green Wave batters were rung up on three strikes. He said they weren’t aggressive enough at the plate. Harriston was the only exception as his bat drove in a run. Cathedral left 12 batters on base in the loss.

“He busted out of a slump a little bit,” Beesley said. “It was good to see him bust out of the slump. His hard work is starting to pay off for him… We couldn’t get the big hit when we needed it. If you cut the errors out we are right there with them.”

Before the game, St. Joe and Cathedral were neck and neck in the district race, but the defeat Wednesday may have given St. Joe a leg up in the race for the No. 1 seed. Cathedral will travel to Madison to play St. Joe on Friday in a doubleheader.

Harriston saw the game through a similar lens as Beesley. The team made too many errors and struggled to get hits when they needed them. He also recognizes Friday as an opportunity to get back on track.

“These are three district games we need to get. We need to get the next two to win the series,” Harriston said. “We just didn’t play defense today. All four runs they had were unearned. We had too many errors. We work on fielding every single day. We have to stop the errors and start putting up better at-bats.”