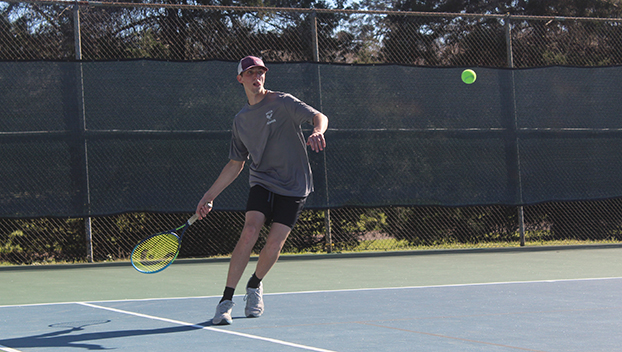 Ram Nate Mudd is in his fourth year playing tennis and is more experienced than his partner Jack Orgeron who started playing last week. Mudd is a junior and his goal is to make it to state this season. He and Orgeron put up a hard fight but lost to Cathedral’s Joseph Garrity and Grayson Guedon 6-4, 6-3 in two sets. (Hunter Cloud | The Natchez Democrat)

NATCHEZ — Wilkinson County Christian Academy doubles partners Nate Mudd and Jack Orgeron played with an unconventional style of tennis Wednesday afternoon. On the other side of the net, Cathedral’s Grayson Guedon and Joseph Garrity had to adjust to the Rams’ play.

Green Wave senior Garrity said the Rams players were good at the net, and Guedon and Garrity were not used to how they played at first. However, they figured things out and turned things around to win 6-4, 6-3 in two sets. Cathedral won five out of seven courts against WCCA to take the match.

“We couldn’t figure out how to lob at first,” Garrity said. “We learned if we could hit it over them and let them make the mistakes, it worked out for the best. My serve was on today too, Thank God.”

Orgeron played exceptionally well for his first tennis match ever. He told Guedon and Garrity he started playing about two weeks ago. His hustle took him all over the court. He made one shot as his racket and arm were outstretched to send a ball over the net that Guedon couldn’t return.

Mudd is in his fourth year of playing tennis and is a junior for the Rams. He said he started playing in seventh grade because his history teacher asked him to play. He said playing with an inexperienced partner was different.

“He is learning the little things and getting better every day,” Mudd said. “He did really good today and held his own. It’s just like every other game. You have to be able to place the ball and hit the ball. There is a lot that goes into it.”

Cathedral struggles to hit, give up too many unearned…