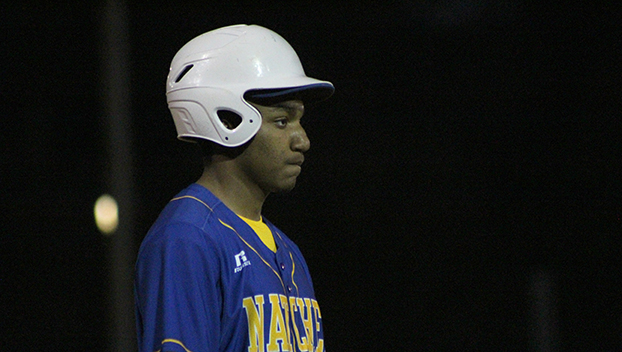 Cameron Craft had one of Natchez's two hits against Franklin County Monday night. The game was a tuneup before district play began this week. Natchez walked 13 batters and lost 11-1. (Hunter Cloud | The Natchez Democrat)

And what Natchez High saw from Franklin County sophomore pitcher Dalton Meadows were a whole lot of fastballs, which led to Meadows striking out 12 batters while holding the Bulldogs to just two base hits as the Bulldogs took an 11-1 win in five innings.

While Meadows had his way with the visiting Bulldogs’ lineup in his five innings on the mound, the same could not be said for Natchez High’s Jaleel Adams, who gave up just six hits but walked 13 batters. Adams allowed 11 runs, nine of them earned, and struck out four batters.

“The main reason (for the outcome) was we had 13 walks,” Natchez High head coach Dan Smith said. “They had six hits. We had two hits. If we cut down on the walks, it’s a completely different ball game, even with those strikeouts he (Meadows) had.”

Natchez High took a 1-0 lead in the top of the first inning against Meadows, but he settled down after that and pitched four consecutive scoreless innings.

“Our pitcher (Adams) had problems throwing strikes, finding the zone. It’s hard to get over that,” Smith said. “I told the kids you can’t defend the walks. You can defend the hits.”

Meadows allowed one earned run and walked just three batters. The defense behind him committed just one error.

Jwun Mackey and Cameron Craft were the only Natchez High players to have a base hit.

Natchez High (4-4-1) played at Florence High School in its Region 5-5A opener on Thursday with the JV game at 5 p.m., followed by the varsity game at 7 p.m. Those games were originally scheduled to take place last Tuesday, but were rescheduled due to the severe weather that pushed through the Miss-Lou region that afternoon and evening.

The Bulldogs then play host to Florence on Friday with the JV game at 5 p.m., followed by the varsity game at 7 p.m.

“Basically, the three teams in our district are pretty good. Florence, we picked them up from 4A. They were in the second or third round in 4A the last few years,’ Smith said. “West Jones, they won it all the year before last. They got (to the finals) in back-to-back years. They’ve been one of the tops teams in Class 5A the past four years, at least in the South. Brookhaven, they’ve been a consistently good program.”

Tornado strikes New Orleans as storms roll through the…