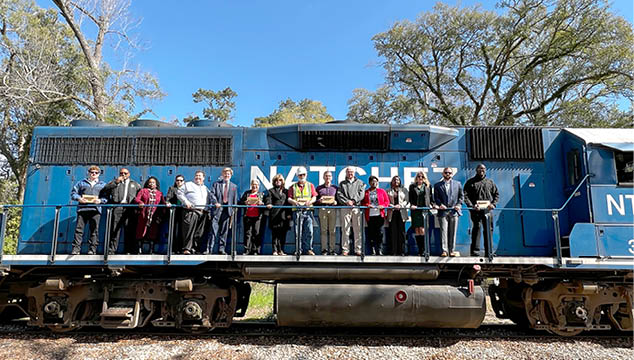 Natchez, Adams County and Natchez Inc. officials and business leaders line up for a photo opportunity on a train engine on the Natchez Railway. (Photo submitted)

NATCHEZ — A critical railroad line into Natchez faced abandonment in 2009 until Natchez Inc., private business leaders and county and city officials convinced the rail line’s owners it was possible to make money from it instead.

Natchez Railway, Natchez Inc. and those officials and business leaders gathered at Duncan Park Wednesday morning to celebrate the completion of a $16 million public-private project to rehabilitate that railroad line, which is considered “the gold standard” of short-line railways, a representative of its owner said.

“This is an example of how a private-pubic partnership is expected to work,” said Doug Davis, a representative of Natchez Railway.

He said the railroad was in a state of disrepair when his company bought it and formed Natchez Railway in 2009.

Fearing the rail line would be disassembled and its parts sold, Natchez Inc. with the help of city and county officials led the way in forming a regional railroad authority and convinced all of the communities up and down the railroad to oppose abandonment, said Natchez Inc. Executive Director Chandler Russ.

“After many, many talks with the ownership of the rail line, they decided instead of abandoning it, they would operate it.”

In 2017, Natchez Inc., city and county officials helped secure a $10 million Tiger Grant from the federal government for improvements for the rail line. Natchez Railway had to put up a $3 million match with that grant.

“Just as we got to the end of that project, we had a huge washout on a bridge right there off Liberty Road north of St. Catherine Creek. We were able to get $2.4 million from the state to help cover that big bridge washout,” Russ said.

All told, Natchez Railway put in about $4 million of its funds with about $12 million state and federal funds to upgrade the rail line between Natchez and Brookhaven.

“The main thing was improvements to bridge structures to allow fully loaded tankers to cross those bridges,” Russ said. “Before the improvements, only tankers loaded at 85 percent could use the line and they could only go 10 miles per hour over the bridges. Today, those tankers can be fully loaded and travel 25 miles per hour. That’s the gold standard for short-line railroads.

“Velocys, all of the future tenants in the Mississippi River Energy Complex, which is the former International Paper site, other port customers, will all be able to use this railway. It could bring a ton of business. We are excited about the opportunity to move products in and out of our port,” he said.

“This is the culmination of many years of work to maintain and rehabilitate our railroad line, which is a very, very important part of Adams County,” said Sue Stedman, who is on the board of Natchez Now, the private-business funding arm for Natchez Inc.

Natchez Mayor Dan Gibson said because of the renewed railway, “we have the opportunity to do more than we have ever done…We can now take a full train load from here to anywhere along the Eastern Seaboard.”

Gibson praised the work of the late Thad Cochran, who for many years represented Mississippi in the U.S. Senate. He said Cochran, along with U.S. Sen. Roger Wicker of Mississippi, Gov. Tate Reeves and former mayors Butch Brown and Darryl Grennell were instrumental in securing funding for the project.

Wes Middleton, president of the Adams County Board of Supervisors, also thanked former Congressman Gregg Harper, who now is a lobbyist for the city and county.

“In closing, I would like to ensure residents that your local elected officials, Natchez Inc. and our lobbyists are working daily to improve the lives of our residents,” Middleton said.

‘Where it all began’ Cemetery celebrating 200th anniversary Saturday…