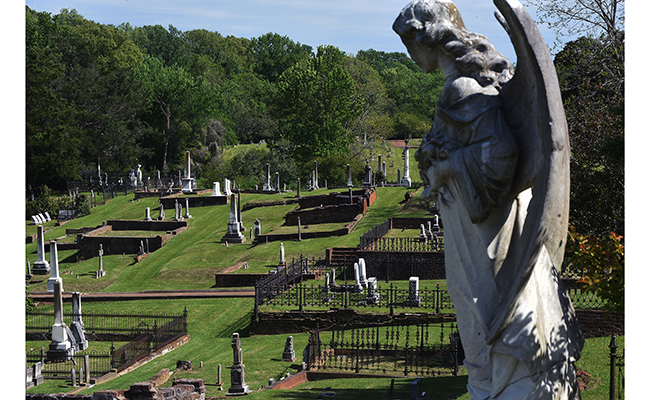 A view of the Natchez City Cemetery. (File Photo | The Natchez Democrat)

NATCHEZ — “Gala Under the Oaks” celebrating the 200th anniversary of the Natchez City Cemetery takes place Saturday from 7 to 9 p.m., “where it all began,” in Memorial Park adjacent to St. Mary Basilica, Event Chair Annette Holder said.

The city’s earlier cemetery was located in what is today Memorial Park. In 1822, most of the remains of those buried there were reinterred at the current Natchez City Cemetery along with remains from private plantation and churchyard burial grounds.

Through the years, the cemetery has evolved into more than just a sacred burial ground.

It now hosts daily visitors who come to hear the stories of its residents which reveal the history, tragedies and mysteries of Natchez while also enjoying views of works of art from the iron fences, tombstones and monuments. Situated on the bluff above the Mississippi, the cemetery is also a place of beauty, Holder said.

People will often stroll through on walks or bicycle rides or just sit and marvel at the sunsets.

“It’s beautifully maintained,” Holder said. “Our cemetery director Mark Fortenberry has done a phenomenal job coordinating upkeep efforts with our men. The cemetery is more than 100 acres and they have it down to a science. It’s also listed as one of the most beautiful cemeteries in the South. It’s a place people enjoy visiting. The history is so fascinating, the monuments are beautiful and the fact that it is so well maintained makes it a great place to visit.”

Tickets to Saturday’s event celebrating the cemetery’s 200 years were almost sold out on Tuesday morning, she said. For the few remaining seats left, tickets are $100 each with proceeds to put into restoring the roof of the cemetery shelter house, which acts as the main office and meeting space for the cemetery.

“The shelter house is a historic building designed by an architect from Natchez (Samuel Abraham Marx) who went on to great fame nationally,” Holder said. “It has one of those clay-tile roofs that are difficult to replicate.”

The need to restore the shelter house, and the cemetery’s anniversary year, is what prompted Saturday’s festivities, Holder said.

The formal event will include food from area restaurants, spirits from local bars and wineries and a seven-piece orchestra, all of which Holder said generously donated their time and efforts to the event. Guests will also be seated at 30 tables-for-10, formally dressed and showcasing décor by Natchez’s nationally accredited floral designer John Grady Burns.

The Garden Club of America and Cemetery Board of Directors also contributed to the landscaping of Memorial Park and raked up more than 100 bags of leaves and mulched flower beds and cleaned up the park especially for the event while the city worked to enhance the lighting.

“We think it’s going to be beautiful,” she said. “We’ve had a lot of people sponsor this event. Locally people have stepped up in a lot of ways.”

This is no surprise, as the Natchez City Cemetery has been sustained by the generosity of supporters through the years, particularly at the cemetery’s largest fundraiser “Angels on the Bluff,” which has sold out of tickets every fall.

“Because of the 200th anniversary, we’re doing Angels on the Bluff for two weekends this year rather than just one,” Holder said. “That program also sells out.”

To buy tickets for this weekend, or to donate to the Natchez Cemetery Association, visit natchez.ms.us/150/Cemetery. For more information, visit the Natchez City Cemetery, 2 Cemetery Road, email natchezcitycemetery@msn.com or call 601-445-5051. Checks can be mailed to P.O. Box 1738, Natchez, MS 39121.