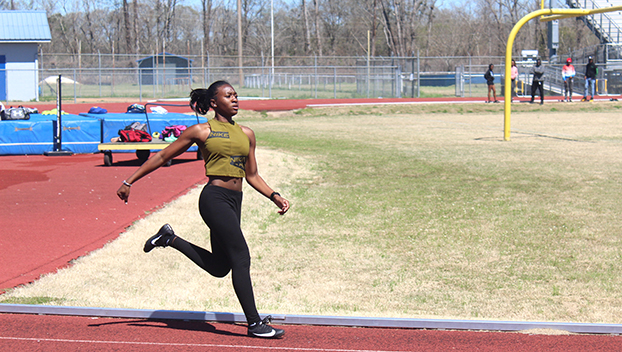 Natchez’s Kalisa White said the coaches are pushing them to be better runners. She has run track since the seventh grade and runs short distances. She enjoys the competitive side of track. (Hunter Cloud | The Natchez Democrat)

NATCHEZ — Practice was mandatory for Bulldog track athletes this week as Head Coach Alicia Wimley led her team through ab workouts Wednesday afternoon. They had a strong performance last weekend, but they could be better, Wimley said.

Saturday, the Lady Bulldogs finished first place overall, and the boys finished fourth overall at the Wordy Hicks Relays in Woodville. She was named the best female coach. There are no official individual results on the MileSplit website from the meet.

It is his first season running track. As-Sabor played basketball for the Bulldogs this season and gave jumping and running a try.

“In the high jump, I was feeling good. I wasn’t taking too long of a stride,” As-Saborr said. “I just started this year. I wanted to get faster. Basketball has helped me some. We work out every day on our legs. We worked on our verticals a lot.”

His teammate Bert Hughes competed in three different classes of events at the Wordy Hicks. He threw in the discuss and shot put. He jumped in the long jump and ran in the 4×100, 4×200, and 4×400 meter relays.

He balances his throwing and running in practice. With throwing, he works on his technique, and for running, he builds off his past experiences running track. The senior said he never threw in a track meet until this year.

“I wanted to try something new since it’s my senior year,” Hughes said. “I thought ‘why not.’ It’s been more fun than I thought it would be.”

By the time the district meet rolls around, he hopes to improve his technique in events. He said as a team, Natchez has a lot of skill but they are learning the techniques.

“Once we can learn the techniques, it will separate us from everyone else,” he said.

A sprinter, she said she can run long distances but prefers sprinting. At races, she enjoys showing off her speed to the crowd.

“It feels good to know I passed the finish line first in those races. It was a good feeling,” Robinson said. “I did it for my uncle (Frank Cooks), who just passed. I dedicated my races to him. I felt like he was with me the whole time. Every time I thought of him, I gained speed.”  She said

Her uncle Eddie Ray holds a track program in the summertime for kids. She got her start running with him at nine years old. She is 16 now.

Over the years, he has worked with her on form and technique. He taught her how to run right and how to breathe efficiently. She said she learned certain points on the track to use her speed effectively from him.

Natchez hosts the district meet at their track, which is an advantage.

“No one knows the track better than we do,” Robinson said.

White has run track since she was in seventh grade. She enjoys the competition and believes competitive people enjoy track the most. She said everything she runs in feels the same regardless of distance. Saturday, she felt some fatigue in her legs after the fourth race, but she pressed on.

“I was tired, but I wasn’t out of energy. My legs just hurt,” White said. “I kept pushing until I crossed the finish line. In the last relay, the three girls carried us.”

Her goal is to improve her startups in time for the district meet on April 5 at Natchez. If she can get her startups faster, it will help her times improve.

Natchez’s track program is in a leg of a relay as Head Coach Wimley takes the baton and begins a new era. She is challenging her kids to give everything to improve. In one weekend, she said she saw a lot of improvement, but there is some room to grow.

The team has to buy into her program’s demands of all or nothing. They have to take things seriously and go the extra 1600 meters. White said she noticed the team going in a new direction.

“It is a big difference. A lot of us have improved since they came along,” White said. “their one goal is for us to win. They push us to places we never thought we could be.”