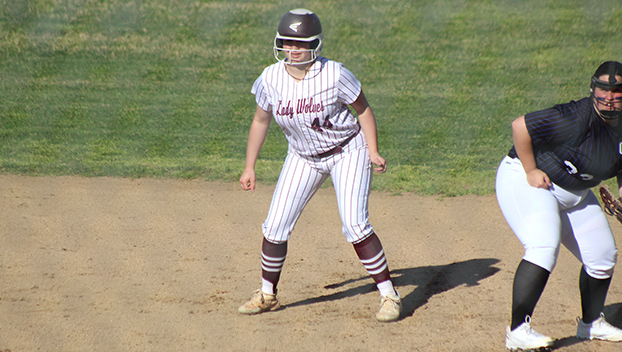 Hannah Hitt takes a lead at first base. She reached base on a single to right field and had the only hit of the game for Monterey. (Hunter Cloud | The Natchez Democrat)

MONTEREY — Oak Hill took advantage of Monterey’s six errors as they won 13-0 in five innings Thursday afternoon. The defeat was the second straight loss to Oak Hill for the Lady Wolves.

They have started the season strong and are a lot better than how they played. Junior Hannah Hitt said they can be better than they were. Monterey had three hits in the game and Hitt had one of them.

“We just have bad days and bad games. Stuff happens,” Hitt said. “We can bounce back by practicing together and working harder as a team. I think we are way better than how we played this week. We could definitely beat them if we played better.”

Oak Hill had 14 hits in the game and stranded 12 runners.

Monterey came into the week with a record of 8-2 but the losses to Oak Hill dropped them to 8-4. Head Coach Cary Shively said the games would be a test for the Lady Wolves.

Oak Hill had great pitching on the mound as their starter finished the game with six strikeouts in five innings pitched and a shutout.

The game was within reach until the fifth inning when Oak Hill sprang open the flood gates and poured seven runs onto the board to go up 13-0. Monterey had runners in scoring position a few times but couldn’t get them across home plate.

Hitt said one of the things she enjoys about softball is the bond she shares with her team. Monterey’s softball team is a close knit group. Before the season they fill out goals they want to accomplish on pieces of paper and give them to Shively.