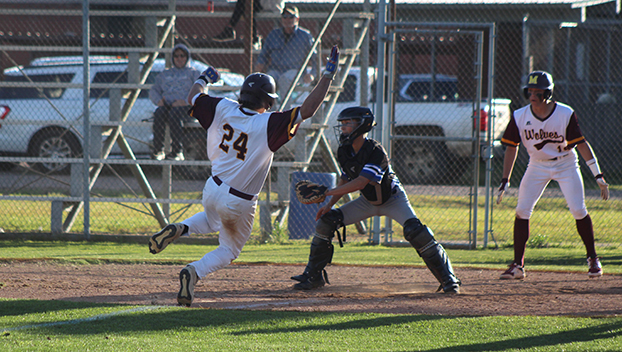 Monterey’s Ethan Heard slides into home plate to seal the victory Thursday afternoon. His score gave the Wolves a 16-6 win on the ten run rule as they snapped a seven year, 14 game winless streak against Oak Hill. (Hunter Cloud | The Natchez Democrat

“It’s been a while since we scratched against them. We had them on the ropes last year,” Head Coach Eric Richard said. “These seniors have been through the worst. I’m sure it felt good for those kids. I hope it gives us a little confidence.”

A wild pitch scored Ethan Heard in the bottom of the fifth to seal the mercy-rule win. Senior Kerry King was the first Wolf out of the dugout celebrating as he threw a fist pump.

King has gone to school at Monterey since Pre-K. He started playing baseball for Monterey in seventh grade and recalls not ever beating Oak Hill in his career.

“It was a good win for the guys today,” King said. “It was a big win. There is nothing better, let me tell you. 14 straight games against these guys, and we finally beat them. It’s just overwhelming to me. I love the game, and I love the sport.”

It was a well-earned victory for the Wolves. Monterey’s bats were clicking early as they scored three runs on four hits in the first inning. In the second inning, they added six runs on four hits.

As a team, Monterey finished the game with 13 hits. They saw the ball well from the start, King said. They took advantage of some walks as well.

“Everything was looking flat and fat, so we banged the baseball around the park,” King said. “We have been doing it all year. Coach says all the time, he preaches it, hitting is contagious. One hit after another, we are banging the baseball over here. Hitting is a big part of our success right now.”

Monterey has some room for improvement. They gave up six runs and had a few routine plays in the outfield they didn’t make. King said some of the misplayed flyballs in the outfield were because of the sun and wind.

The infield played solid, and the pitching was good, Head Coach Eric Richard said. Monterey pitchers need to have a better command around the zone. He said they have not had much practice time as a team since the season started.

Saturday, Monterey will travel to Avoyelles Charter and play a top-eight AA team. They will see how they measure up.

“They will expose every weakness we have. We need to play a team like that,” Richard said. “We will see how we measure up. If we can get past the first round, those are the type of teams we will play. Avoyelles will make us better.”