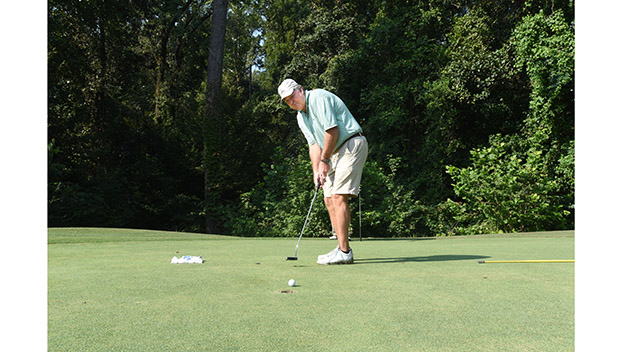 Michael Blain makes a putt before a fundraiser event at Duncan Park in 2017. He started playing golf about 10 years ago. He is one of three Natchezians playing in the Golf Week Amateur Mississippi Tour event held at Beau Pré this weekend. (File Photo | The Natchez Democrat)

Warm weather is in the forecast for the weekend tournament played Saturday and Sunday. It is a break from the cold weather they have had for several tournaments this year. Cotten said he played his first round on the tour in 34 degrees at Shell Landing in Gautier.

The tournament will open with a skins game on Friday. It serves as a practice round for golfers before the tournament. Kaiser, Blain and Cotten tee off in the skins game at 12:50 p.m. Golfers will tee off Saturday and Sunday starting at 8:30 a.m.

“Bubba is in my flight and he is playing some good golf right now, he will be strong competition,” Cotten said. “I have to beat him. My game is coming around. Every tournament we have played in has been cold and I’m not much of a cold weather golfer. I feel good about this weekend.”

Golf Week Amatuer Misssissippi is a tour for amateur golfers and there is a tour in every state in the US. There is a championship flight and flights A, B, C and D, he said. Golfers are placed into each flight based on their handicap and they can move up and down flights through their performances in the tour index.

The events have live scoring which is a plus for golfers, he said. It can help with decision making as the golfers play through a round.

A chance to move up

Kaiser and Blain have played in the tour for three years. Kaiser said he likes to try and coincide his vacations with tournaments so if he goes to Branson, Missouri he would try to schedule it to play in a golf week amateur tournament.

The top 10 players from each flight for each state’s tour make it to the Golf Week Amateur National Tournament held in Hilton Head, South Carolina.

Currently, Kaiser finds himself 482.5 points behind Cotten in the A Flight standings before this weekend’s tournament at Beau Pré. This weekend will offer him a chance to climb up the rankings.

He said the main reason for the gap in points is because Cotten has played in four tournaments, Kaiser has played in two this year. A friendship is shared between Cotten, Blain and him. He said it is fun to rag on each other a little bit regarding how they are doing on the tour.

Last year, they didn’t have the tournament there because of COVID, he said. In 2019, he finished in second place in his flight and would like to place high in his A flight. They usually share their goals for the upcoming tournament in their Friday practice round.

“I go in every time trying to win it. If I can place in the top five in my division then I’m happy,” Kaiser said. “Golf is a pleasure sport for me. It’s more about getting outside and being with people who have the same hobby as you do. I just enjoy being around people and having a good time. If it happens it happens . If it doesn’t, it doesn’t.”

Unlike Kaiser and Cotten who started playing when they were kids, Blain started playing golf when he turned 50. He said he had moved to Beau Pré and was looking for something to do with his friends who lived there.

Over the past ten years he has seen tremendous growth in his game. One benefit of the Golf Week Amateur Tour is he is able to compete in a flight with golfers of the same caliber. He currently plays in the B flight.

“I would like for my game to be better. Golf is a game where you benefit from starting earlier in life. Everyone of all skill levels can enjoy it,” Blain said. “I’m fairly competitive and laid back. I’m not very good but I enjoy it. It is fun to compete with people of your own skill level.”

While his friends play in a flight above him, they still are able to have fun on the course and the tour. He enjoys playing new courses and meeting new people in addition to the camaraderie with Kaiser and Cotten.

Playing on the home course

This weekend he will feel comfortable because he knows the course. It is exciting to show people your home course, he said.

“I would like to finish in the top five in my flight,” Blain said. “Lately I need to keep the big scores off of a hole. I don’t need to mess up any holes real bad and minimize my mistakes to achieve that.”

Cotten started playing golf when he was five years old. He was self taught and grew up playing at Duncan Park. He played baseball in high school and junior college and when the dust settled all that was left to play was golf or tennis.

The amateur tour gives golfers an ability to travel the state of Mississippi and play at different courses. Cotten has played at Beau Pré since 2011 and lives in the community. He will have the opportunity to play on his home course along with Kaiser and Blain this weekend.

“I get to sleep in my own bed at night and use my personal golf cart. I know the golf course like the back of my hand,” Cotten said. “I know the breaks. I have the advantage. I just have to execute. I don’t feel any pressure.”

Through his three years on the tour he has played a lot of different golf courses around the state. He said for a city the size of Natchez, they are blessed with the golf course they have.

“The caliber of Beau Pré is probably rated in the top five kept up courses that I have played in the whole state and Louisiana,” Kaiser said. “I’ve played a bunch of them. We are fortunate to have a golf course as nice as we do.”