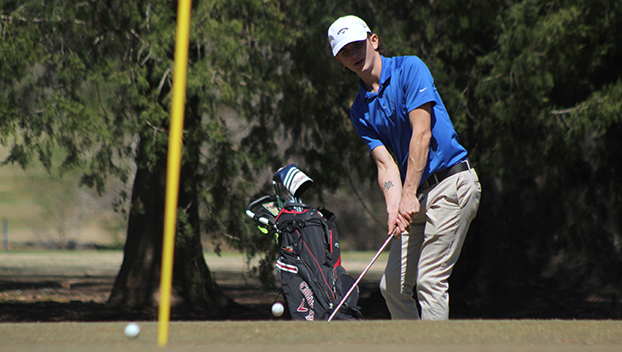 Rebel golfer Alex Patterson hits a chip shot on No.18. He shot 91 to have the lowest score on the Rebels and the lowest score for a team from Natchez. Silliman Institute won the tournament with a score of 363. AC did not have enough players to have a team score.

NATCHEZ — Adams County Christian School did not have enough kids on their team to make up a team but two of their golfers had two of the lowest scores at Duncan Park. Golfers from Natchez High School, Silliman, Cathedral and ACCS played an 18 hole tournament Thursday morning.

Rebels Alex Patterson shot a 91 and Samuel Merriett shot a 92 to have the lowest scores of the Natchez golfers. As a team Cathedral shot a 405, Natchez shot a 401 and Silliman shot a 363. ACCS shot a 187 with three golfers. Patterson said he hardly used his driver in the round.

“I used my irons the whole time and I just felt great,” Patterson said. “The back nine was a little wet and the elevated greens were challenging. Every green on the back nine is three feet off the ground.”

Coming off Hole No. 18, Patterson said with four holes left he had a chance to break 85 if he finished well. He played smoothly on the front nine. On No.13, he had his favorite shot of the day, draining a 10-foot putt for par.

“It was clutch,” he said. “The back nine the wind started and the greens were tough. I had a good bit of mistakes on the back nine.”

His teammate shot a 92 with a strong drive performance. Merriett said he felt confidence stepping up to the tee box but his putting could have been better.

“It’s just something I have to work on more. Putting isn’t the fun part but what you should work on the most,” Merriett said.

On No.18, Merriett hit his driver off the tee to about 75 yards from the hole. He then caught his second shot a little fat and the ball didn’t go where he wanted it to. As his playing partners hit to the green, he regrouped and played an excellent third shot to the back of the green.

After studying his 10 foot putt, he stepped up and sank the shot to get to par. He fist pumped the air. He was pleased with his ability to get up and down.

“It could have been better. I’m happy though,” Merriett said. “I’m glad we go tto play today after all of this rain.”

Cathedral’s Eli Wilson had another great shot when he took out his hybrid and lined up a shot on No.18. With water to his right, tall oak and pine trees in the direct line to the green and open space to the fairway on the left, he opted to take a risk.

His shot was reminiscent of Bubba Watson’s recovery shot at the Masters where he hit it out of the pines. It took one swing and Wilson had his ball at the base of the green for a chance to get an up and down to save par. He finished the round with a 93 and was the Green Wave’s low scorer.

“It was cool,” Wilson said.

Natchez’s Daylan Haywood shot a 96 for his team and teammate Tony Fields IV was one stroke behind him with a 97.