One last run together: Grayson, Gudeon bring swagger to the tennis court 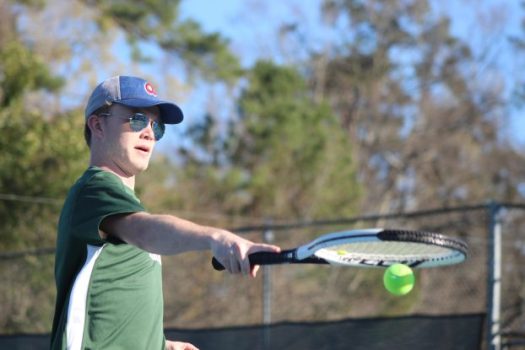 Cathedral senior Joseph Garrity bounces a ball before stepping back to serve. Garrity plays with emotion in any sport he plays and it is the same for Tennis. His goal is to make the State Finals after losing in the semi-finals last year. (Hunter Cloud | The Natchez Democrat) 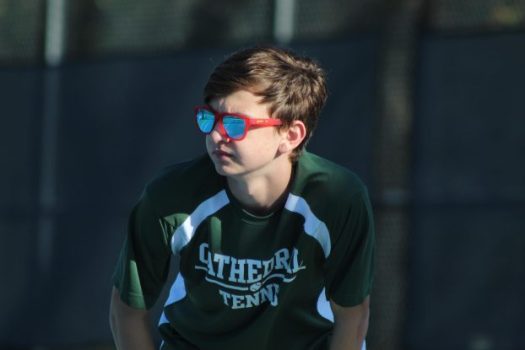 Green Wave junior Grayson Guedon has improved tremendously this season by having more fun with the game of tennis. His head coach said when he gets too serious it throws his game off. Guedon said his plan is to make it to the State Finals after losing in the semi-finals last year. (Hunter Cloud | The Natchez Democrat)

NATCHEZ — Cathedral senior Joseph Garrity and junior Grayson Guedon came into their match against WCCA with confidence after a win against St. Joe Madison Monday. They had lost to St. Al the week before spring break after getting into their heads and letting the game slip away. Wednesday, they continued on the winning path by winning their court against the Rams.

Garrity said the game against St. Joe was their best all season. Typically, Garrity and Guedon get into their heads if they make a bad shot or miss a ball. They play with a lot of emotion and can be very animated on the court, especially with the treatment of their tennis rackets.

“We are brothers at this point. I’m at his house constantly. I feel like that helps a lot. It helps when each of us gets in our heads. We know what to say to get out of it,” Garrity said. “Sometimes it takes us being hard on each other and making us better. Sometimes you have to gauge when you need to be hard or gentle.”

Finding a way to laugh

Guedon and Garrity typically wear sunglasses and have a laid-back approach to the game, even if they are very competitive. Usually, you can hear Garrity crack jokes during the match.

The two played soccer together and ran track and cross country together. Their chemistry is high, Guedon said. His head coach Beth Foster said since Garrity told him to have more fun with the game, Guedon has played better.

“He is a heck of a partner to play with,” Guedon said. “Even if your head is up or down, he will keep making you laugh.”

Having good chemistry allows them to not communicate as much during a match. He said if a ball goes over the net player’s head, they know when they need to switch.

Guedon started playing tennis in middle school because his mom played when she was a kid. She convinced him to play it, and he has now fallen in love with it. Mostly, he loves the team and being with friends, he said.

Ever since he and Garrity fell in the state semifinals last year, he has had it in his mind to get to state again. He said he remembers warming up for the game, and the other team was more experienced and had better shots than them. He hopes to have another chance at the state title in doubles this year.

“We will need to practice, practice, practice and have fun,” Guedon said. “We can’t get in our head. We both have a problem with letting the game get to our heads. We have to keep practicing and winning games.”

A flash of maroon flew in the air and struck Guedon in the leg as he finished speaking. A small sphere rolled across the wooden deck where he stood.

“Did you just hit me with a grape,” Guedon said.

His teammate Meredith Lesley nodded with a grin.

Garrity’s goal is similar to Guedon’s. He wants to win state after they came close to winning the title last year. An AP test coupled with a three-hour drive drained him before the state semi-final last year.

He said he feels they can win it this year, but they will need to believe. Mentally, staying on top of the game would be a big help to reach their goal. He said it takes one bad set to be out of the district or south state.

The full force of playing his final games for Cathedral hasn’t struck him yet. Garrity will graduate in May.

“I feel like it’s soccer season all over again. Right now, it doesn’t feel different,” Garrity said. “Once we get to the end, it’s going to start feeling that way. As of right now, it is just another tennis season.”