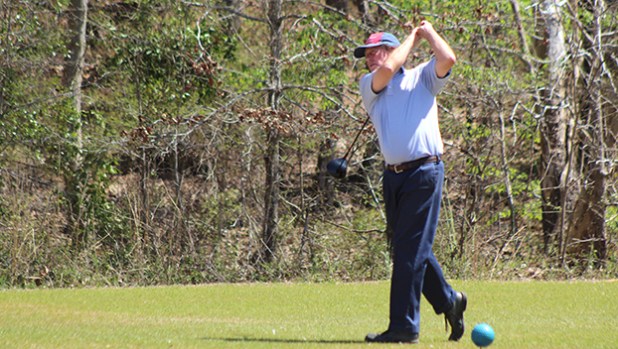 Ferriday native and Natchez resident Greg Brooking tees off on No. 18. He finished the round nine over par and is five strokes behind the leaders. (Hunter Cloud | The Natchez Democrat) 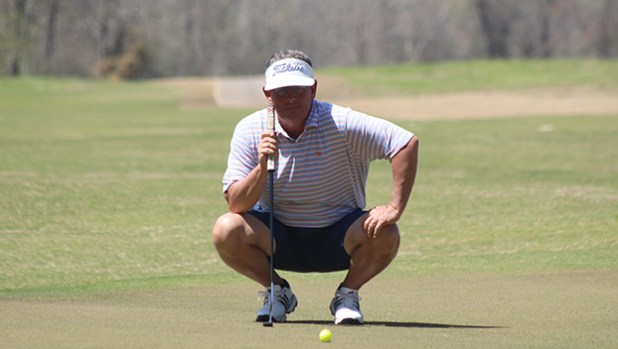 Natchez golfer Tee Cotten studies a putt on Beau Pre's No.17 Saturday. He finished the day 8-over par and is four shots behind the leader in the Golf Week Amateur Mississippi Tour A Flight. Cotten is hopeful to turn in a better scorecard tomorrow. (Hunter Cloud | The Natchez Democrat) 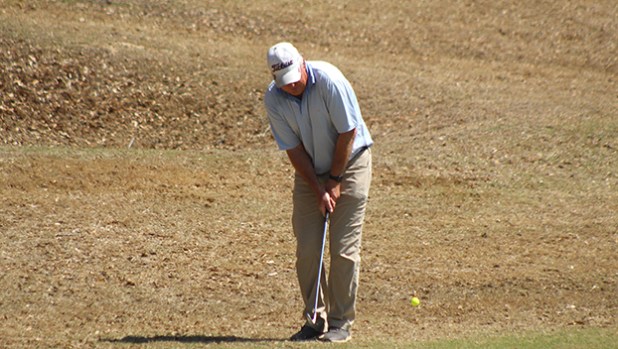 Michael Blain takes a shot from the rough on No. 18. He had a hard time finishing the hole Saturday. (Hunter Cloud | The Natchez Democrat) 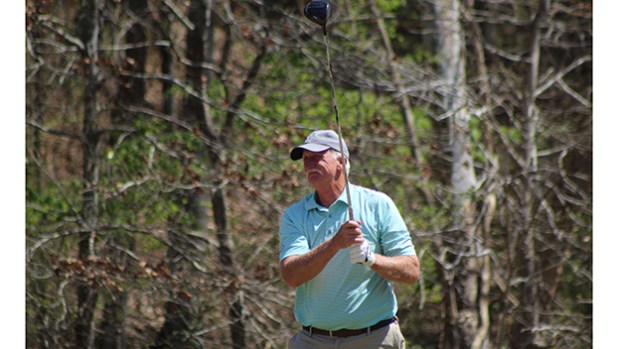 Natchez golfer Bubba Kaiser takes a shot on No.18. He finished 12-over par. (Hunter Cloud | The Natchez Democrat)

NATCHEZ — Natchez golfers Michael Blain, Tee Cotten, Bubba Kaiser, and Ferriday native Greg Brooking finished the first round of the Golf Week Amateur Mississippi Tour event at Beau Pré over par. Of those four golfers, Cotten was the only one who birdied Saturday.

He said he was “tickled” to par 16, 17 and 18 to finish his day, and he could have had a par on 15 but missed a three-foot putt. He is 8-over par going into Sunday’s final round. Those three pars at the end kept him within two strokes of third place and four behind the leaders.

“It gives me hope to go into tomorrow,” Cotten said.

His round got off to a challenging start when he stepped up to the tee box on No. 3. A double-bogey on the hole began with a bad drive. The ball snapped off the clubface and dead left into the woods.

He said he wasn’t sure if he had ever made a shot like that in his life. After re-teeing, he was laying three and hit his fourth shot right next to the green. After chipping up, he made the putt to escape with a double bogey.

Hole No. 7 and 10 were opportunities to score and nullify his double bogey on No. 3. He did just that by sinking a putt on No. 7. On no. 10, he had his best shot of the day preceded by three terrible shots, he said.

“I had a poor drive, a poor second shot and a poor third shot. I was 20 feet off the front of the green,” Cotten said. “I had a very thin uphill lie, so I decided to put it. I made about a 90-foot putt for birdie. Those are the breaks you get in golf. Some of them go in, and some of them don’t.”

Course conditions were pretty good for the amount of rain Natchez received Tuesday. He said while some spots were muddy and balls didn’t roll as far, the course was in good shape.

There were spots on the greens where the grass began drying out and was bumpy. Cotten took his putter on No. 17 and tried to tap the ridges down to smooth it out. His group’s balls still bounced a little bit on their way to the hole.

Two shots off the No. 18 tee, Blain found himself in the middle of the fairway with a good line on the pin. “Come on Mike hit a good shot,” Cotten said as he watched from a hill overlooking the green.

Blain’s iron made contact with the ground before the ball as he sent turf and dirt into the sky, and his third shot bounced into the rough. He had another chance at the pin but left his clubface open as the ball shot off to the right for his fourth stroke. It took him two chips to get back on the green, and he two-putted the hole.

“It was terrible. I played horrible today, and I found it hard to finish,” Blain said. “I always enjoy playing with the guys I played with and the camaraderie. I want to do better than today. I want to not play bad tomorrow.”

Brooking found himself playing with the A flights leaders. He finished the round at 9-over par. His day began with a triple-bogey on No. 1, but he finished with a par on No.18.

Rock “N” Roll flowed from his speakers as his group cracked jokes in the tee box on No.18. He told them it didn’t matter if he played bad, as long as he was in a group as fun as them.

Cotten said as he was leaving the green on No.18 “Tomorrow is a new day.” In the final round Sunday, he and the local players will have a chance to finish strong.

“I know I can shoot under par. If I shoot under par I can catch the leaders. It is just a matter of executing. I didn’t execute well today,” Cotten said. “I want to add that Jason Boykin does a wonderful job running this tournament. We are lucky to have it here this week and lucky to bring people here to our fair city.”