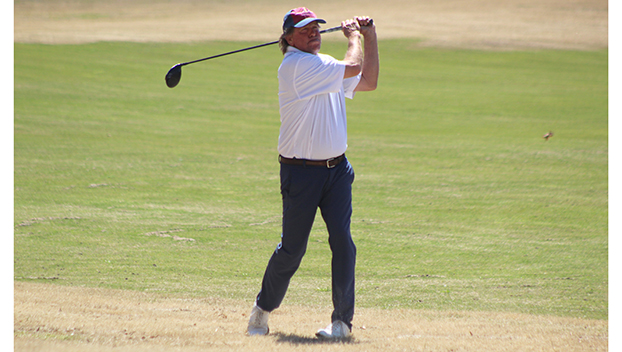 Greg Brooking shot 3 over in the final round of the Golf Week Amateur Mississippi Tour tournament at Beau Pre Sunday. He finished three strokes behind the winner of the A flight and came in second. Here he hits a driver out of the rough and put himself in position to birdie No. 18. (Hunter Cloud | The Natchez Democrat)

NATCHEZ — Ferriday native and Natchez resident Greg Brooking shot a 75 in the final round of the Golf Week Amateur Mississippi Tour at Beau Pre Sunday to finish second in the A Flight. He was five strokes behind the leader Saturday and roared back.

His shot on No.4 won closest to the pin as he birdied the par 3. Three birdies would come in the final round to keep him at three over par for the day, and 12-over for the tournament.

A flight winner Howard Waugh held him off by shooting a 75 to stay three shots in front. Waugh led Brooking by three shots on Saturday, and those three shots were the difference.

“Howard is an incredible player. I play a lot of tournaments against him,” Brooking said. “I never had the lead. I started three strokes behind him, and I was five strokes behind the leader. I caught the leader, but I couldn’t catch Howard. A 75 with those pins is a good golf score.”

Natchez golfer Tee Cotten came into the round four strokes behind the leaders. He said he had to shoot under par to catch the leaders after Saturday’s round. Sunday did not go to plan as he shot eight-over par and finished tied for sixth with Jason Vasser.

Bubba Kaiser, a Natchez golfer, cut five strokes off his round from Saturday by shooting seven over par and finished third in the A Flight. In the B flight, Natchez golfer Michael Blain finished 21st.

Brooking said he had put himself too far out in the first round. He had two double bogeys that cost him four strokes. One of those came on No.16 Sunday. It could have put pressure on Howard, he said.

“I hit off the tee into the water on 16. It was 170 yards carry, and I didn’t make it,” Brooking said. “I pushed the ball too much. I hit in the water there yesterday. With both of those strokes gone, I could have put more pressure on the leader. Golf is a hard game. You can’t let a hole like that bother you. I didn’t let it bother me. Everyone makes double bogeys. You hate to make it at that point in the game.”

He closed out the round with a birdie on No. 18. After hitting his shot into the right rough off of the fairway, Brooking pulled out a driver for his second shot.

His ball was deep in the rough, so he had to keep his hands firm when he hit the ball. At contact, the ball flew straight as an arrow. It landed 20 yards short of the green. He left his first putt short but sank his second to birdie out.

“I was 260 yards out, and I smoked the driver,” Brooking said. “When I left that first putt short, I was really happy to make the second putt. I wasn’t nervous when I hit it. It was a fast putt. The grass out here was fast. It played well. I hit the ball better today.”