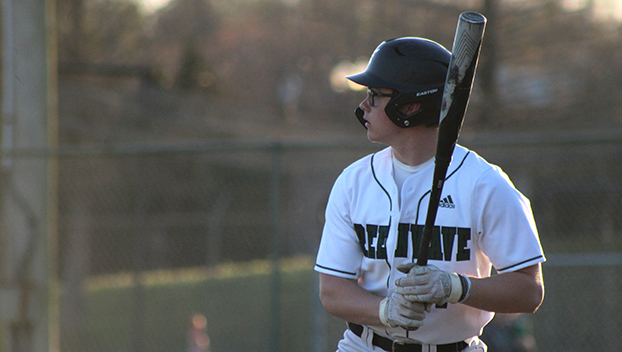 Jake Maples singled in a run during a two-run rally in the seventh inning as Cathedral won 4-3 Friday night. The win split the double header and kept the Green Wave from being swept by St. Joe Madison who won two games in the series. (File Photo | The Natchez Democrat)

MADISON — Jake Maples singled in a run during a two-run rally in the top of the seventh inning as the Cathedral High School Green Wave defeated the St. Joseph Catholic School – Madison Bruins 4-3 last Friday night to split a key MAIS District 3-5A varsity doubleheader.

Noah Russ got on base after being hit by a pitch by Madison St. Joe starting pitcher Bodie Agnew. Then Maples stepped up and his base hit on a 3-1 pitch scored Russ. The Green Wave added another run on a passed ball to go up 4-2.

“The whole series was about pitching. Nobody scored more than four runs in any game,” Cathedral head coach Craig Beesley said. “Fortunately, we were able to score two runs in the top of the seventh. We had multiple hits that allowed us to score (those) two runs.”

The Bruins scored one run off Cathedral starting pitcher Jake Hairston in the bottom of the seventh, but that would be the only run that would cross home plate in that frame. Hairston got the win after allowing three earned runs on six hits and four walks. He struck out five and threw three wild pitches.

The Green Wave won the game despite being out-hit by the Bruins six to four and its defense committing two errors.

“I thought all of our pitchers did well on the mound. It kept us in the game, even though our bats weren’t very hot,” Beesley said.

Agnew was charged with the loss as he gave up four runs, three of them earned, on four hits, struck out seven, walked one, hit two batters and threw two wild pitches in six and two-third innings. Vince Glorioso pitched a scoreless one-third of an inning in relief.

With the win, the Green Wave was able to not only salvage a doubleheader sweep, but it kept the Bruins from sweeping the three-game series. Madison St. Joe defeated Cathedral 4-1 last Wednesday at Chester Willis Field.

“It’s a big series for us. Central Hinds is also 4-2 in district,” Beesley said.

MADISON — Sam Thomas pitched a gem for Madison St. Joe in Game 1 of the varsity doubleheader as he held Cathedral to five hits and struck out nine in the Bruins’ 3-0 win over the Green Wave.

“He was good. He was in the strike zone the whole game,” Beesley said. “We couldn’t string together any hits to put runs on the board.”

Jake Maples pitched a complete game and was charged with the loss after giving up three earned runs on six hits with one strikeout, three walks and one hit batter in five innings.

“He did a great job on the mound. We just couldn’t give him any run support,” Beesley said.

Harper Jones led Cathedral at the plate as he went 2-for-3. Hairston, Noah Russ and Jacob Smith each went 1-for-3. Shelton went 1-for-2 to lead Madison St. Joe while Thomas, Bodie Agnew, Vince Glorioso, Jennings Kimbrell, and Chris Watson each went 1-for-3.

Thomas had one RBI and one run scored while Kimbrell and Watson each scored one run for Madison St. Joe.