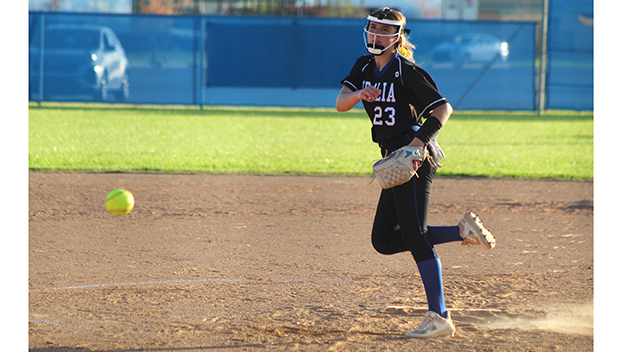 Madelyn Fielder pitched five innings and struck out six batters Monday afternoon. She earned her first win of the season and is only a freshman. Her nickname is Mad Dog. (Hunter Cloud | The Natchez Democrat)

VIDALIA — After playing two games this weekend in the Lady Vikings tournament, Vidalia played Block Monday. Vidalia clicked as a team as they won on a mercy rule 15-3 to improve to 6-14.

Head Coach Taylor Rodgers was absent from her perch in the dugout due to the flu, and her team showed up to play. Vidalia had 10 hits in the game, and Block committed five errors.

Freshman Madelyn Fielder was the winning pitcher for Vidalia as she pitched five innings and struck out six batters. Her team played solid defense behind her, committing one error.

“It was my first complete game to pitch. We earned it,” Fielder said. “We were probably a little tired from this weekend, but we didn’t show it. We just kept doing our job and won.”

Fielder said she started pitching after coach pitch. Her teammates are vocal on the field and in the dugout when she steps into the circle. “Let’s go mad dog. You got this mad dog,” her teammates said.

Mad dog is the nickname her second-grade coach gave her. Kids at school found out, and it has been her nickname since. Now, she steps up to pitch while people shout encouragement.

“There can be pressure, but it’s the best feeling in the world when you are pitching, and everyone behind you is making plays,” Fielder said. “I have learned my place on the team. I have learned how to feel loved, and they all love me the same. I’m just Mad Dog to them.”

With six games left in the season, Fielder has some goals she wants to reach.

“I just want to make friendships, make lifelong friends and win some games,” Fielder said. “I feel like we could all work together. We were all in the game today with 100 percent effort. We all did our thing, and we need to bring it to every game.”

Braves basketball, cross country teams to be honored at…