Learning a new game: Students take up stickball as part of Powwow 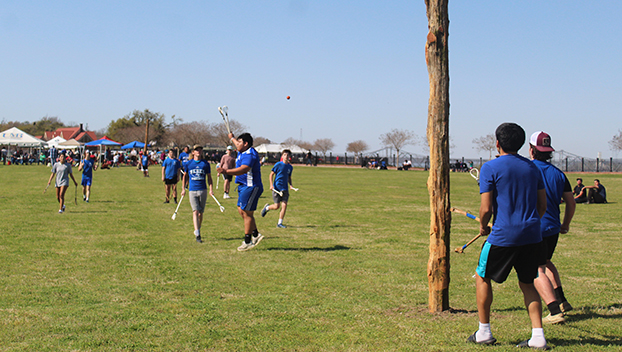 NATCHEZ — Saturday morning was the first time 10 students from Adams County Christian School played stickball. By the end of the fourth game, they were engaged in intense battles for the ball, with wide grins across their faces.

AC’s Vice Principal Cricket Daugherty said Natchez Powwow Chairman Chuck Borum approached the school and asked if it would field a team to learn the sport’s history and heritage.

By the time they stepped onto the grassy field Saturday, the players had two practices under their belts. “Towards the end, they were getting in their grove,” Daugherty said. “Now I know how to teach the kids how to play. Being a part of this event and supporting the powwow is important.”

Stickball is a  traditional game played by Native American tribes that saw a renewal in interest in the 20th century. Now, the Mississippi Band of the Choctaw Indians hosts a tournament every year at their Choctaw fair in Philadelphia.

Eric Billy Sr. said he told the kids the tournament was like the Fourth of July, Olympics and Super Bowl in one event.

He started playing stickball after his brother introduced him to the sport as a kid. Now, he coaches youth basketball and stickball.

“It’s a contribution and about giving back to the youth, to the people, and the community,” Billy said. “I can teach and carry on the tradition is a great honor.”

This year is his first time attending the Natchez Powwow. In two hours, he introduced a group of kids to a new game.

AC student Aiden Rochet said he picked up a stick during one of the practices under the encouragement of Matthew Freeman and Daugherty. He had finished football workouts and started playing.

“It felt natural. I was shooting it like a basketball, and it felt right,” Rochet said. “It was very physical and fast-moving. It has a strategy, too. You couldn’t just be the fastest one and dominate. It was like a mix between rugby and baseball.”

By the fourth game, a team of mostly AC players managed to score two goals. It was the most points they scored all day. Rochet was on a team with three experienced stickball players.

“I enjoyed scoring the most. I think I scored more than most,” Rochet said. “I would play again.”

‘Something not of this world’: Local photographer captures images…