Rebels compete as a team in loss to St. Joe Madison 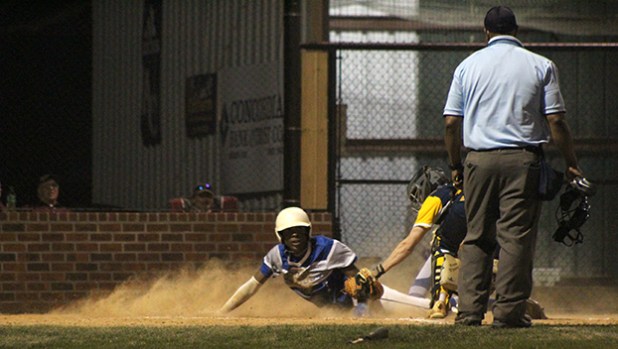 DK McGruder looks to the umpire for a call at the plate after he took a risk to beat a throw home. The umpire called him safe and a smile flashed across his face. A senior, McGruder said Winston sent him home, called him back to third but he decided to “send it,” and beat the throw. It was AC’s only run in a 6-1 loss. (Hunter Cloud | The Natchez Democrat) 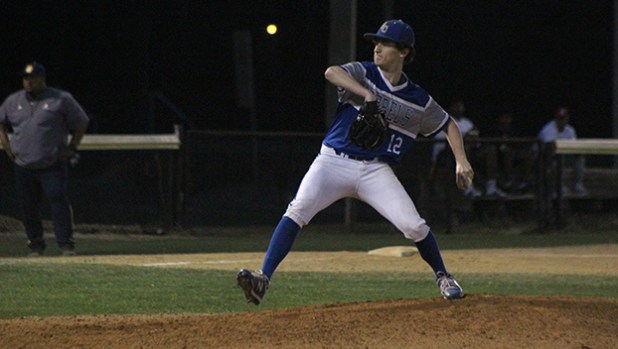 AC Junior Jack Krev pitched five innings of work and kept his team in the game. It was his best outing of the year, head coach Jake Winston said after the game. Rebels Headmaster David King said he was proud of the way he battled. (Hunter Cloud | The Natchez Democrat

NATCHEZ — Adams County Christian School gave all it had in a 6-1 loss to the visiting St. Joe Madison Tuesday night. Head Coach Jake Winston told his team after the game he was proud of the way they competed for an entire game.

AC junior Jack Krev got the start on the bump and threw about 110 pitches in six innings of work. DK McGruder came on in relief for him. Krev battled on the mound to keep his team in the game.

His toughest test came in the fifth inning as St. Joe loaded the bases with no outs and the Rebels were down 2-1. He struck out a batter, got a sacrifice fly, and a ground out to get out of the inning. They gave up two runs to go down 4-1, but it could have been a lot more. Headmaster David King said “You’re showing some heart tonight big guy,” when Krev came to the bench.

Winston said he had gotten rattled a little in the first but made an adjustment, found the strike zone, and pitched his best outing of the season.

“I started attacking the batters with more strikes and locating the curveball,” Krev said. “I was more focused. I felt like I could have improved, but it is something to work off of.”

St. Joe Madison is a tough ball club that took two games from Cathedral last week and is in the driver’s seat for the MAIS 4A playoff race. The Bruins are 18-4 this season.

Krev said when he stepped on the mound today, he didn’t feel any pressure.

“I’ve been doing this for a while. I know my stuff is good enough to get ground balls and compete,” Krev said. “I wasn’t worried about it. I’m just glad we competed as a team. We didn’t let the game get away. There isn’t much else you could ask for.”

AC had some offensive spark in the game. DK McGruder was hit on the hand on a bunting attempt as he pulled his bat back. He took first base and started to break for second base when Krev made contact with the ball.

McGruder used his speed to get from first to third by the time Krev reached first. Winston sent McGruder home but told him to stop a quarter down the baseline.

An intense look of focus came across McGruder as he switched into high gear and strived towards the plate, diving to avoid the tag of the catcher. It wasn’t clear if he would be safe or out while the dust settled, he looked to the umpire as he signaled safe, and a smile flashed across his face.

The senior said tonight wasn’t a sad loss. AC came out and played hard from the first pitch to the last. He was proud of his teammates. The hunger and desire to win is there.

St. Joe Madison pitched their ace against the Rebels. He said they showed they are a beatable team if AC plays the same way they did Tuesday night on Friday.

AC played one of its best ball games defensively. They limited mental errors and made routine play. Errors have been a problem they have faced all season. McGruder said he could see a difference in their performance Tuesday night.

“I could tell the energy was up. We came out like we wanted to win. We came out as a team,” McGruder said. “It is a big difference. You can tell everyone’s energy was there.”

McGruder came off the field and encouraged his teammates after they trailed 4-1 in the fifth inning. “Come on bro, let’s go. We can get three runs bro,” he said.

Winston told his team they stayed within the game and were focused. He was proud of their effort and how they were good teammates Tuesday night.

The difference in the game between AC and St. Joe was the experience the Bruins have. He said three or four of the St. Joe players would play baseball at the next level next year.

AC competed against them for seven innings. St. Joe had some big hits in big moments. He said the game might have been different if those hits had come through for AC instead of St. Joe.

After the two games at St. Joe Madison Friday, AC has three series left to play in the season. Winston said he is not worried about if his team would make the playoffs. He is concerned about something else.

“I’m just trying to get these guys to play as a team. I want them to compete and play hard,” Winston said. “You are never happy with a loss. A young team like us, you can build off of losses by how we carry ourselves. We battled and competed.”